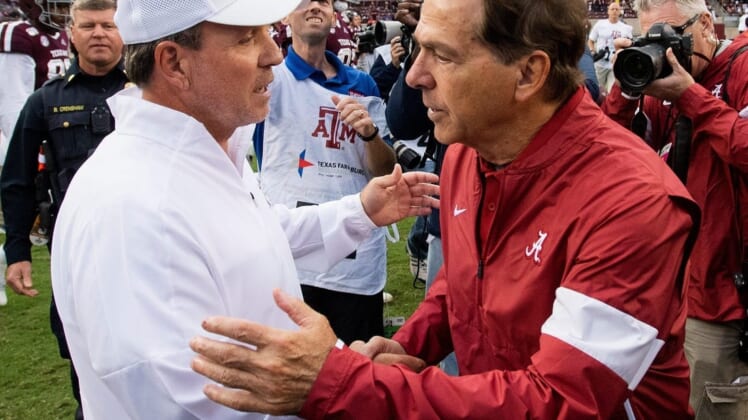 Fisher said in an interview with a San Antonio TV station that most of the Aggies’ 11 early enrollees do not have an NIL deal in place, pushing back on the notion initially espoused by Alabama coach Nick Saban that Fisher “bought every player” on his team.

“I just researched this,” Fisher said in the KSAT interview, which was recorded last Friday and aired Sunday night. “Of the 11 guys we have in place that came early? One guy has an NIL deal. So all these stories you’re hearing are complete lies.”

Saban set off a firestorm when he told business leaders at an event in Birmingham, Ala., that without regulations for NIL, coaches at competing programs would be able to “buy” any player, likening it to free agency without a salary cap.

“A&M bought every player on their team — made a deal for name, image, likeness. We didn’t buy one player, all right?” Saban said. He later apologized for singling out Texas A&M and other programs.

“Some people think they’re God,” Fisher said. “Go dig into how God did his deal, you may find out about a lot of things that you don’t want to know. We build (Saban) up to be the czar of college football. Go dig into his past.

Fisher also told KSAT that he did not plan to talk with Saban about his remarks, which he initially made clear at his press conference Thursday.