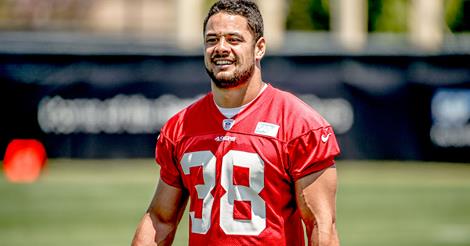 After two weeks of preseason football, the 49ers rookie has shown he clearly belongs in the NFL, putting together two consecutive jaw-dropping performances. In fact, he’s looked so good that the other players on the field have looked downright ordinary when caught in the same frame while Hayne smoothly chews up yardage.

After the former Rugby League star from down under put on another show in Week 2 of the preseason, Tomsula couldn’t hide his excitement.

“It’s going to be hard to keep him off the 53, isn’t it,” Tomsula said after the game, smiling (h/t SFGate.com). “Zing. Obviously, the guy’s doing really well. He’s making a great case for himself.”

Hayne’s first effort during Week 2 was a magnificent punt return on a ball that had sailed over his head. He gained 27 yards on this play and then followed it up with returns of 34 and 23 yards, making them look easy with his long, smooth strides and effortless jukes.

As if this weren’t enough to prove his worth as a punt-return specialist, Hayne then showcased outstanding pure rushing abilities in the 49ers offense. He finished the game against the Dallas Cowboys with 54 rushing yards on eight carries (6.8 yards per carry) and once again gained over 30 yards in one fell swoop for the second-straight week with a 34-yard scamper.

Heck, at one point, the 49ers even threw him out on the field as a kickoff-return defender. And, to nobody’s surprise, he was the first man downfield, almost making the tackle on the return man.

There is no doubt the 49ers feature a crowded backfield, which has been the reason many have thought Hayne would have a hard time making the team’s final roster. However, when you consider Kendall Hunter didn’t even touch the ball in Week 2, the 49ers may be considering him the expendable one at this point, clearing a space for the electric Aussie.

However general manager Trent Baalke works it, in conjunction with Tomsula and his staff, one thing has become clear: Hayne is not going anywhere. He’s here to stay, and it looks like he will not only make the team’s 53-man roster but will also be an impact player on special teams.