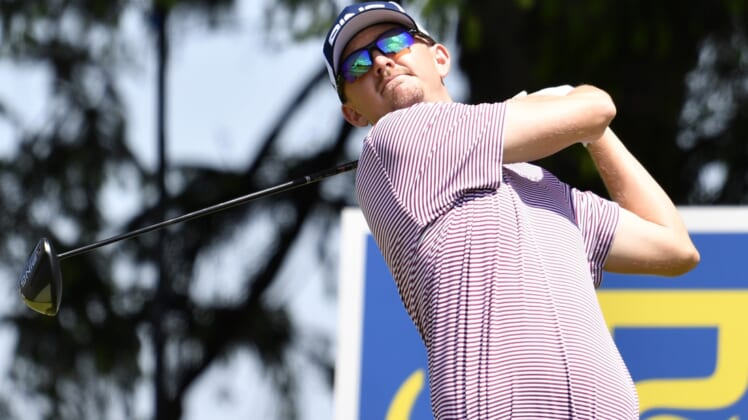 Jim Knous fired a seven-under 65 Saturday to vault up the leaderboard and into a first-place tie with Maverick McNealy after 56 holes of the Fortinet Championship in Napa, Calif.

The pair are tied at 14-under 202, sitting two strokes ahead of five players tied for third at the Silverado Resort and Spa North Course.

McNealy birdied his final three holes to climb back into the lead after a rough front nine. McNealy, who owned the 18-hole lead, carded four bogeys for a 38 going out.

Knous, on the other hand, recorded six birdies on the front nine en route to eight overall, moving nine spots up the leaderboard. He had just one bogey for his round.

“It was a great day, putter got hot there late on the back nine, on the front nine, stayed hot pretty much most of the round,” Knous said. “Especially a nice putt on the last, that was a bonus. Just played solid, just stayed patient, kind of let the course come to me.”

“I played really well yesterday so it was cool to be able to go into today, even though the score wasn’t great yesterday, to go in with some momentum,” said Homa, who shot 72 on Friday. “Made a lot of good swings yesterday on the back nine and made some birdies coming in, so felt good. Played honestly better yesterday than I did on Thursday I felt like tee to green, just didn’t hole any putts.”

Ten players are T9 at 10 under, four shots back. Webb Simpson also tallied a 65 Saturday to be a part of that group, and Phil Mickelson jumped 15 spots after a 67.

“Yeah, it was a good way to finish,” Mickelson said. “I hit some good shots, I had a lot of chances early on and made a couple of putts that I haven’t been making throughout the week, or poor strokes. And then the back nine I made a lot.”