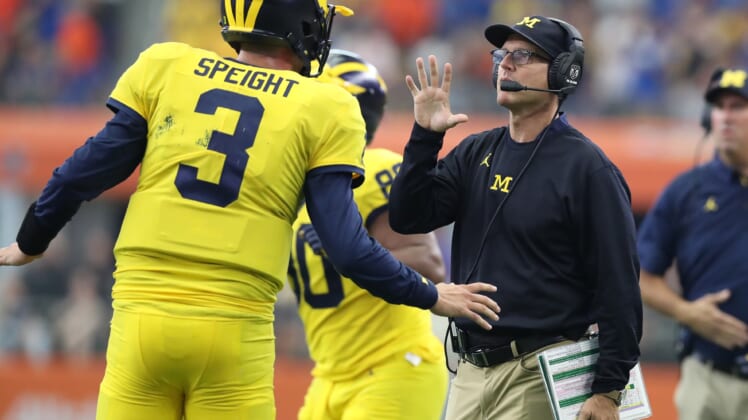 John O’Korn will be the man under center for the Michigan football team for the foreseeable future as Wilton Speight recovers from an injury. Wolverines head coach Jim Harbaugh told reporters Monday that Speight will be out “multiple weeks” with the injury that knocked him out of Week 4’s game.

. @CoachJim4UM: Wilton Speight "won't be able tp compete this week or for multiple weeks. John O'Korn will be the starter."

The good news for Speight is that this isn’t a season-ending injury. While he is out, Brandon Peters will back up O’Korn, while Dylan McCaffrey will be the third-string quarterback.

O’Korn did an amazing job when called upon to take over for the injured Speight in Week 4 against Purdue. Speight had been struggling somewhat to move the offense when he was knocked out of the game. O’Korn came in and got the passing game going full throttle, going for 270 yards on 18-of-26 passing with one touchdown and one interception.

Michigan is coming off a bye heading into Week 6. The Wolverines have their rivalry game against Michigan State this weekend, a potential trap game against Indiana in Week 7 and the pivotal showdown against Penn State in Week 8.