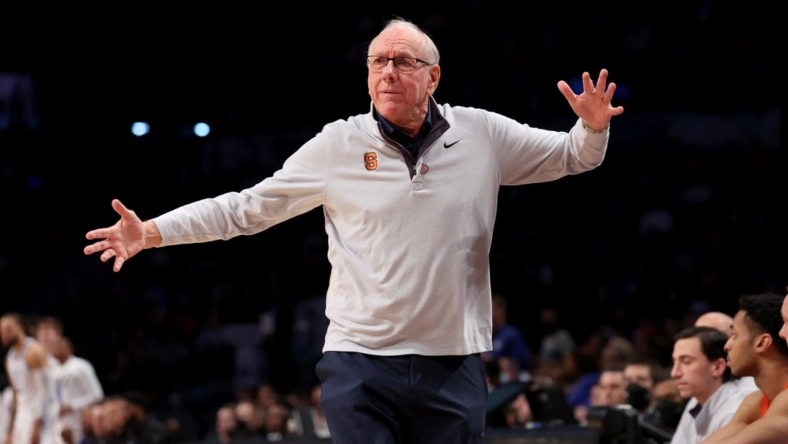 Jim Boeheim is coming off his first losing season in 46 years as Syracuse head coach, but you wouldn’t know it by listening to him this week.

“We’re going to be in the NCAA Tournament,” Boeheim said after Tuesday’s practice in Syracuse. “This is the best team we’ve had in a while.”

Boeheim’s confidence will be put to the test Monday against visiting Lehigh in both teams’ season opener.

The Orange will attempt to bounce back from a 16-17 campaign in which they lost five of their final six games to miss the postseason entirely. Three of their top four scorers, including two of Boeheim’s sons, have moved to the professional ranks. But from Boeheim’s seat, they left plenty of talent behind.

“He’s as explosive a point guard as we’ve had here in a long time” Boeheim said of Mintz. “He’s like Jonny Flynn, but he’s much bigger. I think he can get 14 to 15 points every game and he could get 25 some nights.”

The other returning starter for the Orange is senior center Jesse Edwards, who took a big step forward last season by averaging 12 points, 6.5 rebounds and 2.8 blocks.

Sophomore forward Benny Williams is among the youngsters who need to step up if Syracuse is going to return to its winning form.

“He has to get 10 to 11 points and six rebounds for us,” Boeheim said of Williams, who averaged 1.9 points and 1.4 rebounds last season.

Lehigh lost 10 of its first 11 games last season en route to a 13-19 campaign. This season, the Mountain Hawks are picked to finish third in the Patriot League behind the strength of senior guard Evan Taylor, who averaged a team-high 13 points a season ago.

“Especially since it’s the beginning of the year, it is a great way for us to test how good we are and see what we can learn from, especially since we are playing teams like Syracuse and Virginia Tech, back-to-back,” Taylor said.