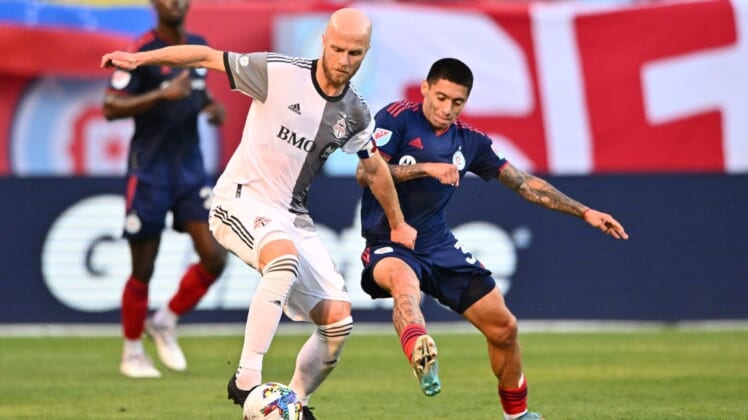 Jhon Duran scored two early goals to lift the host Chicago Fire to a 2-0 win against Toronto FC on Wednesday.

Duran put the Fire ahead 1-0 in the fourth minute. A pass from Chris Mueller at midfield rolled past Duran, but the 18-year-old Colombian showed off his speed and hustle to get behind the Toronto defense and reach the ball before directing a shot from the top of the box past goalkeeper Quentin Westberg.

The youngster had a pair of chances to double the lead a few minutes later. Shortly after his shot from the right side of the box was blocked, he got behind the Toronto defense once again for another opportunity.

Duran made it 2-0 in the 16th minute. Xherdan Shaqiri redirected a pass at midfield toward Duran, who beat out defender Chris Mavinga in the race for the ball and got inside the box on the left side before beating Westberg, who had come far out of his net to defend.

It marked the fourth straight game that Toronto conceded at least two goals.

The Reds showed signs of life late in the half. Jesus Jimenez directed a header on net that was saved by goalkeeper Gabriel Slonina in the 40th minute.

A minute later, Mark-Anthony Kaye, playing his first game with Toronto since being acquired from the Colorado Rapids, had the best chance of the half for the visitors. His shot from the top of the box forced Slonina to dive to get his hands on it, deflecting it wide.

Toronto defender Domenico Criscito had a chance to get the visitors on the board in the 73rd minute when he had time and space outside the box, but Slonina got his hand on the ball to deflect it over the net.