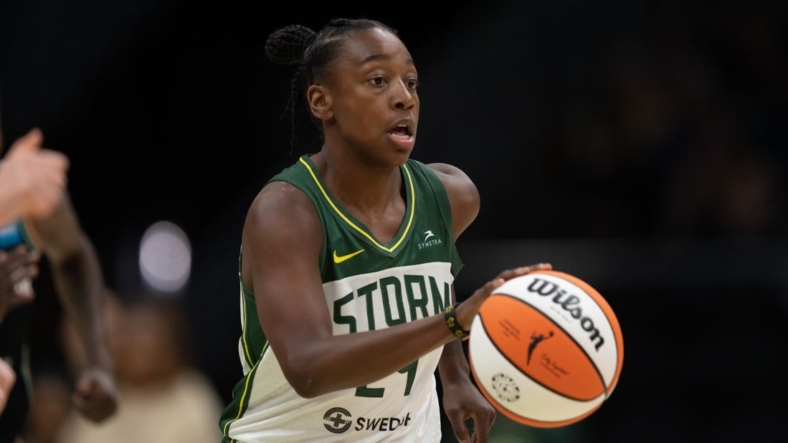 The Seattle Storm grabbed home-court advantage away from the Las Vegas Aces in Game 1 of their WNBA semifinal series.

The fourth-seeded Storm defeated the top-seeded Aces 76-73 on Sunday and will try to build a 2-0 lead in the best-of-five series when they visit Las Vegas again on Wednesday night.

“It’s important to not be satisfied at all,” Seattle coach Noelle Quinn said. “The job is not done. We did nothing but attain our goal, but that’s not the end goal. We have to stay focused. Look at the film, adjust and get ready for Game 2.”

“I’ve grown up this season and this year,” Loyd said. “This is my eighth year and I should be growing as a player and a person and I feel like I’ve been doing that this year. I’ve worked a lot in the offseason for these moments. I like to create for myself and create for others. It takes me back to playing at the park, being able to create your shots and just have fun.”

The Storm raced to a 26-15 lead after the first quarter, led for more than 36 minutes and outscored the Aces 16-0 in fast-break points.

“I thought we played tight, especially in the first quarter,” Las Vegas coach Becky Hammon said. “We played like the world was on our shoulders.”

Chelsea Gray led the Aces, who had won their previous six games, with 21 points and five assists. Kelsey Plum scored 20 but missed two 3-pointers and had a turnover in the final minute. Jackie Young, who was named the league’s Most Improved Player on Monday, scored 11.

“There were times when we were passive, or we were settling a little bit with outside jumpers,” Gray said. “We’ll see in this next game how we respond.”