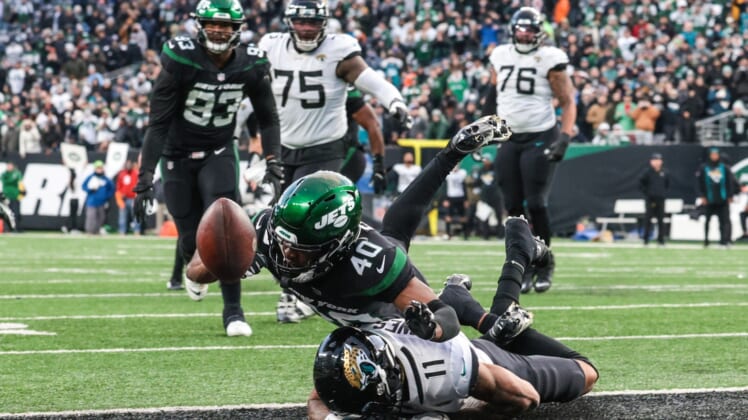 The Tampa Bay Buccaneers were a wild-card team last postseason, never enjoying home-field advantage until they won Super Bowl LV at their home digs. This year, they already know their path to a repeat will be a bit easier.

The Buccaneers locked up the NFC South with their most recent win, and with two weeks to go, all that’s left is for them to jockey for the conference’s No. 1 overall playoff seed. That begins Sunday when they visit the rebuilding New York Jets.

“Having been through the playoffs last year, playing three road games leading up to the Super Bowl, kind of gives all of us confidence that we’re going to get things figured out,” tight end Cameron Brate said.

Tampa Bay (11-4) put its division away Sunday with its handy 32-6 win at the Carolina Panthers, a nice rebound from its 9-0 loss to the New Orleans Saints the week before. Tom Brady threw for 232 yards and a touchdown, Antonio Brown hauled in 10 catches for 101 yards and second-year running back Ke’Shawn Vaughn had a breakout game with 70 yards and a score on seven carries.

Now Brady gets to face a struggling team he’s historically picked on during his New England Patriots days. Brady is 29-7 all-time against the Jets (4-11), marking the second-most wins he has earned against a single opponent.

How New York’s inexperienced secondary handles the future Hall of Famer will go a long way in determining Sunday’s outcome. The Jets’ pass defense ranks 28th in the NFL at 250 yards per game. Every cornerback who has started at least one game for the Jets this season — including 2021 draft picks Michael Carter II, Jason Pinnock and Brandin Echols — is 22 to 24 years old.

“I think I was in the womb when (Brady) was in college or something like that,” Pinnock said. “But this is Tom Brady. It’s a tremendous opportunity. I’m a young guy, (going) against a wise old GOAT. Looking forward to it.”

Coaching figures to be an X-factor, too. The Jets did not have Robert Saleh on the sidelines for Sunday’s 26-21 victory over the Jacksonville Jaguars while the first-year coach battled COVID-19. But Saleh and six players, most notably starting defensive linemen John Franklin-Myers and Folorunso Fatukasi, returned Wednesday from stints in COVID protocol.

On the flip side, the Tampa Bay Buccaneers announced this week that coach Bruce Arians tested positive for COVID-19. They also placed starting cornerbacks Jamel Dean and Sean Murphy-Bunting on the reserve/COVID list.

Harold Goodwin, Tampa Bay’s assistant head coach and run game coordinator, is running the team in Arians’ absence, including if Arians is unable to return in time for Sunday.

“We’ve always said ‘next man up,’ so when one man goes down, another guy’s got to rise to the occasion,” Goodwin said. “And for a player, as a competitor, you want to do well. And so far so good — knock on wood — we’ve had those guys step in and do a nice job.”

For the Jets, receiver Jamison Crowder (calf) did not participate in practice. Defensive lineman Sheldon Rankins (knee) also sat out, but Saleh said it was a scheduled day off to rest his knee.