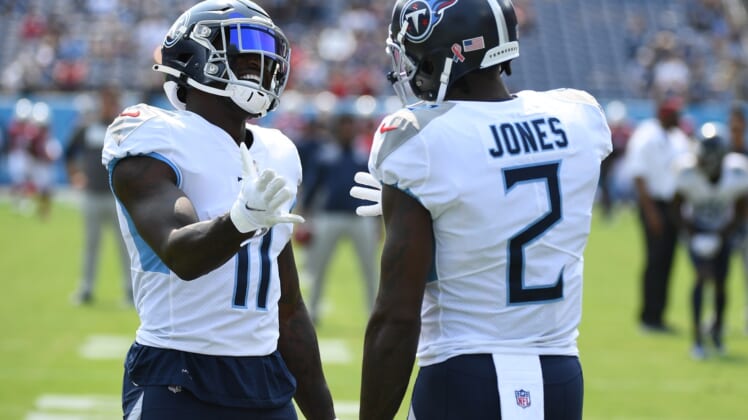 The AFC South-leading Tennessee Titans face the winless New York Jets on Sunday, although solidifying their advantage atop the division does not figure to be as simple as it looks on first glance.

After winning their second consecutive game Sunday, 25-16 over the Indianapolis Colts, the Titans (2-1) could be without their top two wideouts in Julio Jones and A.J. Brown. Neither practiced on Wednesday because of hamstring injuries, with reports that Brown could be absent after leaving last Sunday’s game early.

Titans quarterback Ryan Tannehill still figures to have plenty of pass-catching options against the Jets, even if his two best targets are not available. Tannehill threw three TD passes Sunday and had completions to nine different players, with 11 targeted. But he threw two interceptions as Tennessee overcame three total turnovers.

“I’m not sure who’s gonna trot out there (at wide receiver) on Sunday but I’m confident in whoever it is,” Tannehill said. “I’ve had a ton of reps with and confidence in those guys and (multiple targets) has been something we’ve done since I’ve been here. I’m excited about the guys who can possibly step up for us.”

As a passing offense, the Titans are merely middle of the pack with 762 yards and 7.4 yards per completion. They remain elite in the running game with Derrick Henry, who carried the ball just 17 times in a season-opening defeat to the Arizona Cardinals but has averaged 31.5 carries and 147.5 yards in the two games since.

On defense, Tennessee had two sacks of Colts quarterback Carson Wentz, who was pressured all day. Wentz threw for just 194 yards.

Now the Titans’ defense gets to harass a rookie quarterback in the Jets’ Zach Wilson, whose early learning curve has been sharp. As if seven interceptions to just two TD passes isn’t cause enough for concern, Wilson has also been sacked 15 times, with five more coming in last weekend’s 26-0 loss to the Denver Broncos.

“I knew this was going to be tough for us because it’s our first time all together, our first time in a new offense,” Wilson said. “There’s going to be some adjusting. But as long as we take those losses as a learning experience, and every single week we keep stacking the bricks and getting better, then we’re going to be right on track to where we need to be.”

Over the past two weeks, the Jets have been outscored 51-6, yet all is not a complete loss. On defense, the Jets give up 328.0 yards per game, 10th best in the NFL.

That New York defense also gives up 23.3 points per game, better than teams with winning records like the undefeated Las Vegas Raiders, as well as the 2-1 San Francisco 49ers, Green Packers and Titans.

But the defense has been unable to put the woeful offense in position to produce points. Not that it hasn’t tried. Jets defensive tackle Quinnen Williams was particularly effective while helping to hold the Broncos to 3.2 yards per rush on 37 attempts.

“This defense is made of the right stuff in terms of, ‘Give us an inch of grass and we’ll protect it,” Jets head coach Robert Saleh said. “They take that to heart and it’s been pretty cool to watch.”

The Jets also were missing a pair of receivers at practice Wednesday. Elijah Moore and Jeff Smith were out due to concussions.