Jets vs Colts: Can lightning strike twice for Mike White? 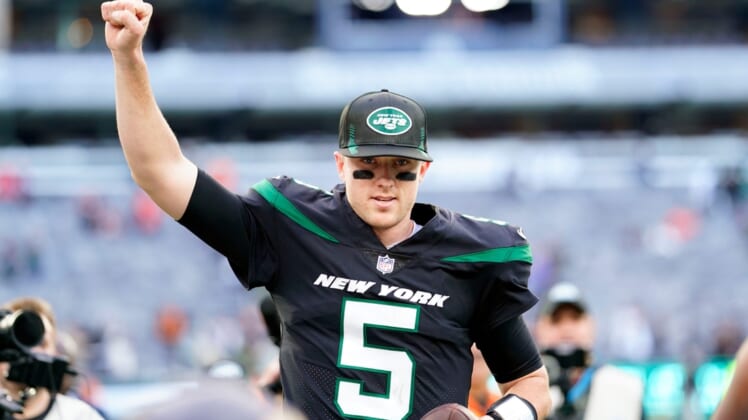 Mike White woke up as a relative unknown on Sunday but he’ll be soaking up the national spotlight four nights later when the New York Jets visit the Indianapolis Colts on Thursday night.

The 26-year-old White became an instant cult hero when he started in place of an injured Zach Wilson. He completed 37 of 45 passes for 405 yards and three touchdowns during a 34-31 home win over the Cincinnati Bengals in his first career NFL start.

White tossed the decisive 13-yard scoring pass to tight end Tyler Kroft and he joined Cam Newton (422 yards in 2011 for the Carolina Panthers) as the only quarterbacks to top 400 yards in their first career starts.

He even received one of the ultimate New York compliments — a stadium full of fans chanting his name.

“At first, I kind of had to listen again,” White said with a smile. “Like, are they chanting my name?”

With Wilson (knee) still ailing, the Jets (2-5) are again calling on White to start against the Colts (3-5).

It’s even being floated that the fifth-round pick in 2018 by the Dallas Cowboys could remain the starter even after the return to health of Wilson, the 2021 No. 2 overall pick.

“That’s for you guys to talk about,” Jets coach Robert Saleh said. “I know exactly how we’ll operate. I know exactly what we’re looking for. If it’s something you want to play with and have fun with, I mean, it doesn’t surprise me.”

White split his college career at South Florida and Western Kentucky. He passed for more than 4,000 yards in each of his two campaigns with the Hilltoppers and the Cowboys took a flier on him.

Dallas released White among the final cuts prior to the 2019 season. The Jets later added him to the practice squad but he didn’t see the field until Wilson departed with a sprained right knee during a 54-13 loss to the New England Patriots on Oct. 24.

White did low-key preparation for the start against the Bengals and even caught a two-point conversion pass on a trick play.

“The only difference is that I got more reps at practice,” White said. “It felt normal, nothing out of the ordinary. I didn’t stay up watching film and put too much into my brain and get stressed out.” 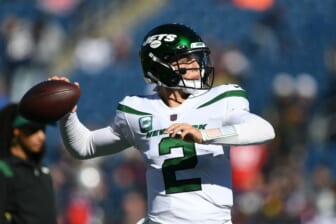 Jets vs Colts: Must-win for Indianapolis

The Colts are in must-win mode as they enter a two-game stretch of games against the lowly Jets and Jacksonville Jaguars.

Indianapolis lost 34-31 in overtime to the Tennessee Titans on Sunday. Quarterback Carson Wentz threw one interception with less than two minutes left in regulation and another in overtime.

“I feel like I beat us with those turnovers,” Wentz said. “As a competitor and my hardest critic, you feel that weight and you let your guys down even though I have the utmost confidence in our defense and they did a great job stopping them, but they were already in field goal range.”

Wentz had been intercepted just once all season before the double dose of miscues. He has passed for 1,926 yards and 14 touchdowns.

The second-year duo of running back Jonathan Taylor and receiver Michael Pittman Jr. have been thriving for the Colts.

Taylor ranks second in the NFL with 649 rushing yards. Pittman leads Indianapolis with 45 receptions and 594 yards and is tied for the team lead with four scoring catches.

The vastly improved Pittman has already surpassed last season’s figures of 40 catches for 503 yards and one touchdown.

“I think it’s just familiarity with the offense, but I don’t think that I am a different player from last year,” Pittman said. “I think that there is more opportunity, but I mean, there’s not a big difference. I didn’t all of a sudden take a magic pill.”

Colts receiver T.Y. Hilton (concussion) will miss the game after being hurt against Tennessee. Star guard Quenton Nelson (toe) didn’t participate in Tuesday’s walkthrough but is expected to play Thursday.

New York offensive tackle George Fant (ankle) and receiver Corey Davis (hip) were among the players who didn’t practice. Fant was injured against the Bengals while Davis could miss his second straight game.