Jets stay in playoff hunt with win over Senators 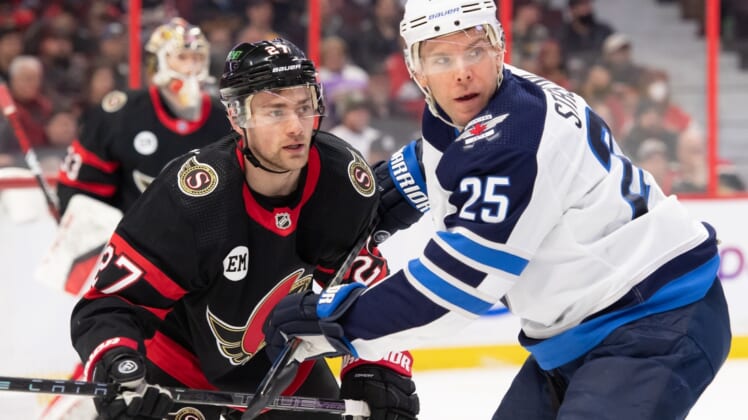 Nikolaj Ehlers collected one goal and two assists to lead the visiting Winnipeg Jets to a crucial 4-3 victory over the Ottawa Senators on Sunday to keep their faint playoff hopes alive.

Paul Stastny, Pierre-Luc Dubois and Kyle Connor all netted one goal and one assist for the Jets (34-28-11, 79 points), who snapped a four-game losing skid. Goaltender Connor Hellebuyck made 31 saves. Winnipeg sits seven points outside of a playoff spot with nine games remaining.

Brady Tkachuk scored twice in a three-point game and Josh Norris posted one goal and one assist for the Senators (26-40-6, 58 points), who have lost three straight. Goalie Mads Sogaard stopped 21 shots.

Norris notched his 32nd goal of the season to open the scoring 108 seconds into the clash. As Norris headed to the slot, Tkachuk fired a no-look back-hand pass that Norris blasted for his sixth goal in as many outings.

Ehlers equaled the score thanks to a lucky bounce with 1:11 remaining in the opening frame, netting his 25th of the season, and fifth in as many outings, when a pass ricocheted off a defender’s stick into the goal.

Dubois’s 26th of the season – and 100th of his career – that snapped an eight-game drought put the Jets ahead for good 107 seconds into the second period. Then Stastny doubled the Winnipeg lead just before the game’s midway point by converting an Ehlers pass during a two-on-one rush for his 19th of the season.

Tkachuk provided a boost for the Senators with a power-play goal 50 seconds into the third period, only to see Connor’s 42nd goal of the season restore Winnipeg’s two-goal edge five minutes later.

Tkachuk notched another man-advantage marker with 6:02 remaining in regulation by batting a puck out of the air for his 26th of the season to make it a one-goal game. Despite late pressure, the hosts could not find the equalizer.

The Jets suffered a loss when top-line center Mark Scheifele left the game favoring his left shoulder late in the second period after being on the receiving end of a hard check from Parker Kelly. Winnipeg is also without captain Blake Wheeler due to injury.