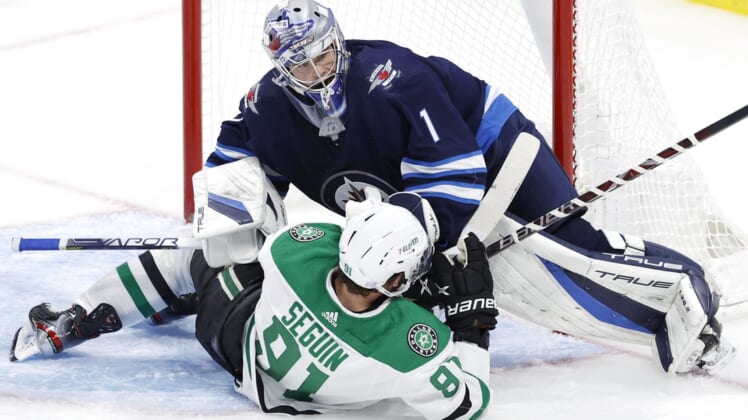 The Winnipeg Jets visit the Dallas Stars on Friday night with both teams looking to build on what they hope were statement wins.

The Jets entered the All-Star break on a 1-5-2 skid, making Tuesday’s 2-0 victory over the Minnesota Wild one of Winnipeg’s most important results of the season. Minnesota was on a six-game winning streak before Connor Hellebuyck blanked the Wild with 27 saves.

“I think we protected the house real well. We had good backchecking,” Hellebuyck said. “Our (defense) just played a phenomenal game, keeping everything to the outside, allowing me to see pucks and clearing rebounds. … It wasn’t a whole lot of scrambles. It was tight, and guys were playing off each other, and that’s what you want to see.”

Tuesday’s game was the first of five straight games against Central Division opposition for Winnipeg, while the Stars exited the All-Star break facing a slate of eight consecutive divisional games.

Dallas also got its second half off to a winning start with a 4-3 result over the Nashville Predators on Wednesday. Despite surrendering the lead three different times to the Predators, the Stars went ahead for good on Luke Glendening’s goal at 3:24 of the third period.

“It was a physical game,” Glendening said. “That’s kind of what we’re expecting the second half (of the season). … We’ve put ourselves in a tough spot. To start climbing the standings, we’ve got to start beating teams in our division. Every game is big for us but especially in our division.”

The Stars have a five-point lead on the Jets for fifth place in the Central, though both teams sit outside the current playoff picture. Both teams have winning records within their division thus far — Dallas is 7-5-1, and Winnipeg is 7-4-2.

This is the second of four meetings this season between the two Central rivals. The Jets won the first encounter, a 4-3 shootout victory on Nov. 2.

Since the Jets also face the Predators on Saturday, Hellebuyck and backup goalie Eric Comrie are likely to split the back-to-back starts in some order. Tuesday’s shutout snapped a seven-game (0-5-2) winless drought for Hellebuyck.

Jake Oettinger stopped 20 of 23 shots in the Stars’ win over the Predators. Braden Holtby returned from a lower-body injury to act as Oettinger’s backup on Wednesday, so the Stars could return to their usual rotation and start Holtby against the Jets.

Roope Hintz has 11 points (six goals, five assists) in his past eight games for the Stars, including five multi-point outings.

After slumping for much of the past two months, the Stars’ penalty-kill unit has started to find its form. Dallas is a perfect 7-for-7 against opponents’ power plays over the past three games.

Pierre-Luc Dubois, Neal Pionk and Austin Poganski are questionable for Friday’s Jets lineup due to the health and safety protocol. Logan Stanley and Nathan Beaulieu (lower-body injuries) are also questionable.

Stars forward Radek Faksa is questionable for Friday after suffering an undisclosed injury during the third period against Nashville.