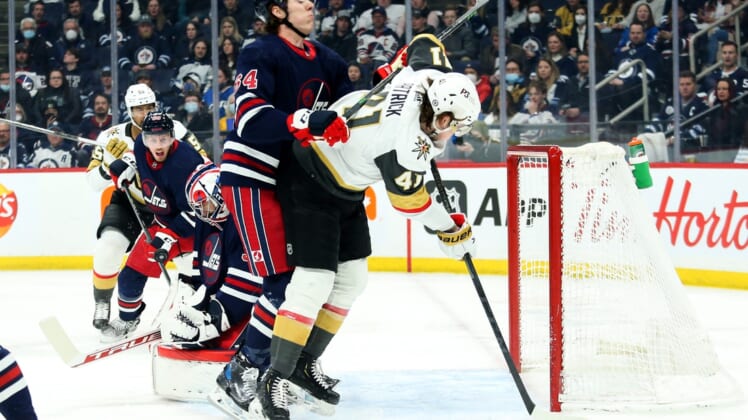 Kyle Connor had a goal and two assists as the host Winnipeg Jets cruised to a 7-3 victory over the slumping Vegas Golden Knights on Tuesday night.

Mark Scheifele, Blake Wheeler, Logan Stanley and Josh Morrissey each had a goal and an assist and Nikolaj Ehlers and Adam Lowry also scored goals for Winnipeg, which won for the fourth time in five games.

Connor Hellebuyck made 35 saves as the Jets closed to within two points of the Golden Knights for the final playoff spot in the Western Conference.

Nicolas Roy, Alex Pietrangelo and Michael Amadio scored for Vegas, which took its fifth straight loss and fell for the 11th time in the past 15 games (4-10-1). The Golden Knights allowed a season-high goal total.

Laurent Brossoit stopped just nine of 13 shots before being replaced by rookie Logan Thompson with 8:51 left in the second period. Thompson finished with seven saves. It marked the first time in franchise history that the Golden Knights, outscored 23-11 over the past five losses, allowed at least five goals in three straight games.

Vegas started strong, outshooting the Jets 7-0 over the first 12 1/2 minutes, including a pair of good chances by Jack Eichel, one of which went off Hellebuyck’s mask. But Winnipeg tallied the final nine shots of the period while scoring two goals in the span of 33 seconds.

Connor followed with his 38th goal while extending his goal streak to five games. His wrist shot from the right circle went through Hague’s legs and inside the far post.

Vegas cut the deficit to 2-1 at the 6:49 mark of the second period when Roy scored his 11th goal on the season. But Winnipeg answered with goals by Ehlers, Stanley and Scheifele over the span of 9:21 while chasing Brossoit in the process.