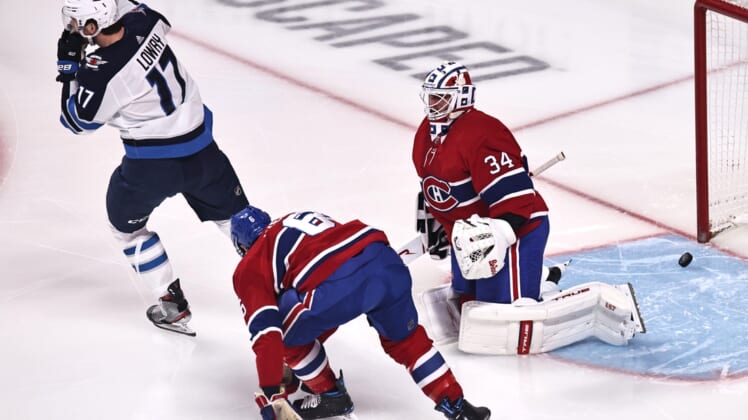 Connor Hellebuyck made 36 saves and the Winnipeg Jets scored three goals in the first period en route to a 4-2 victory over the host Montreal Canadiens on Thursday.

Defenseman Josh Morrissey scored 18 seconds into the contest and Trevor Lewis and Nikolaj Ehlers also tallied in the first period for the Jets, who improved to 5-2-0 against Montreal this season. Andrew Copp sealed the win by scoring into an empty net with 38 seconds remaining in the third period.

Phillip Danault and fourth-liner Paul Byron scored and Jesperi Kotkaniemi notched two assists for the Canadiens, who have lost three of their last four games.

Montreal’s Jake Allen turned aside 23 shots while starting for the second time in as many days. Interim coach Dominique Ducharme told reporters prior to the game that star goaltender Carey Price will not be available until next week because of a lower-body injury.

The offensive fireworks started early, as an unmarked Morrissey converted from the high slot. The Canadiens have surrendered a goal in the opening minute in back-to-back games.

Danault answered 82 seconds later after backhanding home a rebound following a sharp-angle shot from Kotkaniemi. Danault’s goal was his fourth of the season.

Winnipeg claimed a 2-1 lead at 8:03 of the first period after Lewis fended off Montreal defenseman Victor Mete before deflecting home blueliner Neal Pionk’s diagonal centering feed. The goal was Lewis’ second of the season.

The Jets doubled the advantage just over five minutes later as Ehlers used his speed up the left wing before wristing a shot that squeezed inside the near post. The goal was his 16th of the season and gave him seven points (three goals, four assists) in seven games versus the Canadiens this season.

Tyler Toffoli and Artturi Lehkonen each hit the crossbar in the second period before Montreal benefited from a fortuitous carom to trim Winnipeg’s lead to 3-2. Defenseman Jeff Petry’s dump-in banked off a stanchion, allowing Byron to take advantage of an out-of-position Hellebuyck for his fourth goal of the season.