Jets ride wave of momentum into date with Senators 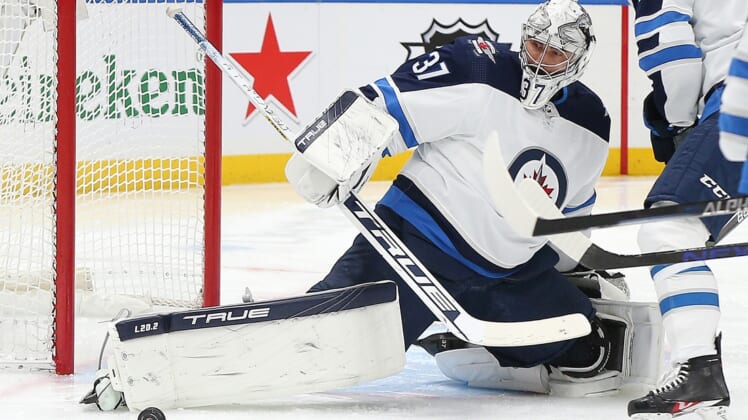 With the playoff race in full swing, the Winnipeg Jets can’t afford any breaks in the momentum when they host the Ottawa Senators on Thursday.

The Jets are 6-2-0 over their last eight games, bringing them closer to a postseason berth. While a top-three spot in the Central Division may be difficult to reach, Winnipeg entered Wednesday within three points of the Dallas Stars and the second Western Conference wild-card slot.

Vegas is one of the other teams ahead of Winnipeg in the standings, adding to the importance of the Jets’ 4-0 shutout over the Golden Knights on Tuesday. Though Winnipeg was outshot 42-26 in the game, Connor Hellebuyck stopped all 42 shots for his fourth shutout of the season.

Since the Jets also host the Columbus Blue Jackets on Friday, Hellebuyck and backup Eric Comrie figure to split the two starts. Hellebuyck is no stranger to playing in back-to-back games, but Comrie has been an excellent second option, going 7-2-1 with a 2.34 goals-against average in his 11 games.

Managing workloads during a postseason chase is always a difficult matter, especially when any game on the schedule can present a challenge … or a trap. The Senators are 1-5-0 in their last six games and have one of the league’s lowest point totals, yet they continue to play competitive hockey.

On Tuesday, the Senators and New York Islanders were scoreless until 9:49 of the third period, when New York’s Scott Mayfield broke the deadlock. That was the first of three late goals for the Islanders in a 3-0 result, as Semyon Varlamov stopped all 24 of Ottawa’s shots.

“You’ve got to be willing to stay 0-0,” Smith said. “I thought we broke first …. we give up that breakaway to Barzal, if we just stay above him, stay above him, maybe we’re (getting to overtime).”

The Senators have been shut out eight times this season.

Anton Forsberg stopped 24 of 26 shots in a solid effort at his own end of the ice. Forsberg has received the majority of recent starts for Ottawa and is likely to get the nod against Winnipeg.

Travis Hamonic may make his Senators debut on Thursday. The veteran defenseman was acquired from the Vancouver Canucks on Monday in exchange for a third-round pick in the 2022 draft.

Adam Lowry has missed Winnipeg’s last two games due to COVID-19 protocol, and is questionable for Thursday’s lineup.

Nikolaj Ehlers is on a six-game point streak, collecting five goals and three assists along the way. Ehlers has scored in five consecutive games, matching the longest goals streak of his seven-year NHL career.