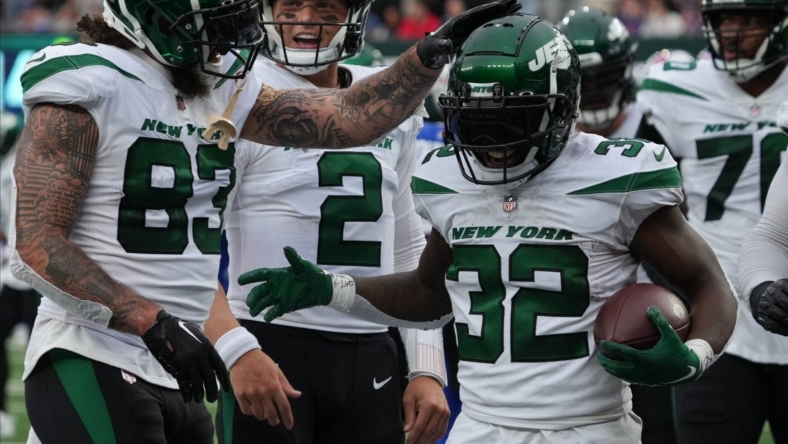 The Jets (6-3) took its three-point lead after Greg Zuerlein kicked a 28-yard field goal with 1:43 remaining, capping a 14-play drive where New York ran 10 times and forced Buffalo (6-2) to use its three remaining timeouts.

Allen appeared he was going to execute a dramatic finish but his long pass to Stefon Diggs was nullified by a holding penalty to offensive lineman Dion Dawkins. Two plays later, New York defensive end Bryce Huff hit Allen’s right arm resulting in a 19-yard loss and a fumble recovered by Buffalo’s Ryan Bates at the 14-yard-line.

After the fumble, Allen made a low throw to Diggs and was seen holding his arm. The game then ended when Gardner kept pace with Davis along the left sideline and broke up the pass.

New York quarterback Zach Wilson completed 18-of-25 passes for 154 yards and a seven-yard touchdown pass to James Robinson in the third quarter. His final completion was a 12-yard slant to Denzel Mims that set up the game-winning field goal.

Allen rushed for two TDs in the first half as Buffalo built a 14-3 lead. Allen completed 18-of-34 passes for 205 yards while gaining 86 yards on nine rushes.

Diggs finished with five catches for 93 yards, all in the first half.

Buffalo took a 7-0 lead on Allen’s quarterback sneak with 4:39 remaining in the first quarter. Zuerlein curled a 53-yard field goal inside the left post to make it 7-3 with 35 seconds left but Allen’s 36-yard run put Buffalo up 14-3 with 4:39 remaining.

Michael Carter’s 6-yard run up the middle with 32 seconds left moved the Jets within 14-10 by halftime after Garrett Wilson’s 24-yard catch and a successful fake punt.

Gardner also set up Robinson’s 7-yard reception by intercepting Allen with 5 1/2 minutes left in the third shortly after Wilson lost a fumble. Bass then tied it by hitting a 51-yard field goal early in the fourth.