Jets rack up goals in high-scoring win over Blackhawks 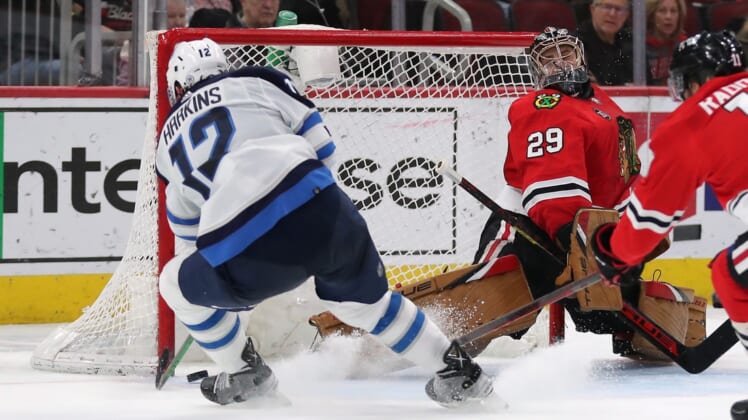 Jansen Harkins scored twice to fuel a flurry of four straight second-period goals and Kyle Connor had a goal and three assists to boost the visiting Winnipeg Jets to a 6-4 victory against the Chicago Blackhawks on Sunday night.

Andrew Copp and Mark Scheifele each contributed two assists while goaltender Connor Hellebuyck made 32 saves as the Jets won for the third time in four games.

Winnipeg opened the scoring at 9:14 of the first period, as Nikolaj Ehlers beat Chicago goaltender Marc-Andre Fleury on a wraparound to extend his point streak to five games, a run that includes goals in four straight contests.

Connor tallied his first assist of the night on the play, and left the arena with a seven-game point streak.

Chicago rebounded early in the second period, as Jonathan Toews and Dylan Strome stunned Hellebuyck with goals 23 seconds apart to provide the Blackhawks a 2-1 lead.

He struck again about nine minutes later before Connor registered a power-play goal at 17:36 of the second to make it 4-2 Winnipeg. Fleury lost his glove on the play, but referees elected not to blow the whistle on the discretionary call, and the Jets scored.

Josh Morrissey provided the ultimate game-winner two minutes later. The period came to a close shortly thereafter, as a frustrated Fleury, who stopped 26 shots, slammed his stick on the bench.

Chicago drew to within 5-4 with third-period goals from Taylor Raddysh — a recent acquisition from Tampa Bay in Friday’s trade for Brandon Hagel — and Philipp Kurashev.

The Blackhawks pulled Fleury with just over two minutes remaining but were unable to score. Blake Wheeler, who also had an assist, scored an empty-net goal with 1:09 left to cap the scoring.

Strome and Raddysh had a goal and an assist for Chicago, and Patrick Kane had two assists.