Jets’ power play lights up the net against Blackhawks 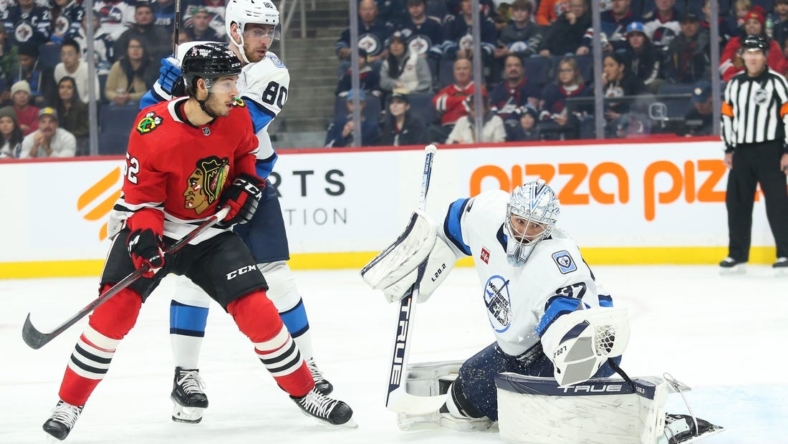 Josh Morrissey and Pierre-Luc Dubois had two of Winnipeg’s three power-play goals, and each added an assist, while Connor Hellebuyck made 30 saves to record his 30th career shutout, as the surging Jets won 4-0 over the visiting Chicago Blackhawks on Saturday.

Nate Schmidt also scored and Adam Lowry added a short-handed goal for the Jets, who went 3-for-4 on the power play to extend their point streak to six games (5-0-1).

Meanwhile, Hellebuyck was sharp against a Chicago group that was more active than its shot total might indicate. The veteran netminder, who made 25 saves during a 4-0 win over St. Louis on Oct. 24, has stopped 96 of 100 shots he’s faced in his last three games — and has six wins in eight starts.

The Blackhawks’ Arvid Soderblom stopped 21 of 24 shots through the first two periods before leaving with an apparent injury. In his NHL debut, backup Dylan Wells made 12 saves, and allowed a wide-open Schmidt to score from the circle 4:59 into the third for Chicago, which is 1-3-2 since a four-game winning streak.

The Jets came out as the aggressor, recording the game’s first five shots on goal. However, the Blackhawks regrouped and eventually outshot Winnipeg 12-11 through the first 20 minutes.

Winnipeg posted the first six shots of the second period, and after the Blackhawks again found their offense, was rewarded with 9:56 remaining in the middle frame. On the power play, Morrissey drove a slap shot through traffic and by Soderblom for his first of the season.

The Jets then came through while a man down with 6:27 to go in the second. Taking advantage of some casual Blackhawks’ passing, Lowry picked up the puck on the neutral-zone boards, broke in and beat Soderblom for a 2-0 Winnipeg edge.

With the Jets back on the power play, some well-timed passing from Morrissey (10 assists on the season) to Kyle Connor ended with Dubois’ strike past Soderblom with 2:05 remaining before the second intermission.