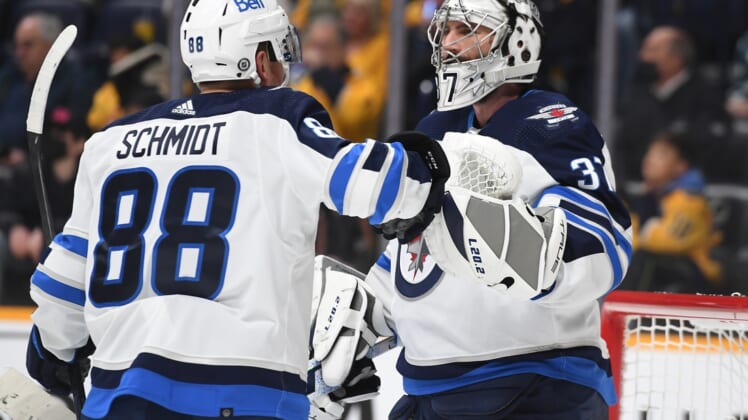 Coming off a big comeback victory, the Winnipeg Jets look to continue the momentum when they open a four-game homestand with Monday’s contest against the Chicago Blackhawks.

The Jets were down 2-0 through the first seven minutes against the Nashville Predators on Saturday before roaring back with five unanswered goals in the 5-2 victory. Blake Wheeler recorded two goals and three assists.

Winnipeg capitalized on a lack of discipline from the Predators, as 45 Nashville penalty minutes resulted in eight Jets power plays. The Jets scored three times with the extra attacker and took the lead on two goals during a five-minute power play in the third period.

“The trap sometimes getting a five-minute power play is that you think you have time to score, but what happens is you just start wasting time,” said Pierre-Luc Dubois, who scored his 20th goal of the season during that extended man advantage. “So, we wanted to be aggressive, we wanted to score whenever we had a chance and we did a really good job of that.”

The Jets have earned five of a possible six points in three games since the All-Star break, as the club is pushing to get back into the postseason picture. An extended stretch of home games would seemingly be ideal, though the Jets are a modest 11-8-1 on home ice this season.

One of those home wins came in the Jets’ first meeting with the Blackhawks, a 5-1 Winnipeg victory on Nov. 5. The Jets held a 33-18 shots advantage that night, in what was the Blackhawks’ lowest shots total of the season … until Chicago faced off against the St. Louis Blues last Saturday.

That game saw the Blackhawks manage only 16 shots in a 5-1 road loss in St. Louis, as Chicago interim head coach Derek King said his players “weren’t prepared” for the Blues’ attack.

“That’s not good enough…. We just can’t do that,” King said. “You can’t put an effort like that out and expect to maybe steal a game from somebody. That’s not going to happen.”

The Blackhawks are 2-6-2 over their last 10 games and sit seven points behind the Jets for sixth place in the Central Division, and six points out in the wild-card race.

Winnipeg’s power-play unit might find some more success against the Blackhawks’ struggling penalty kill. Chicago has allowed at least one power-play goal in seven of its last eight games, killing off only 16 of 25 penalties in that span.

Dylan Strome scored the Blackhawks’ only goal against the Blues. Strome has 14 points (six goals, eight assists) over his last 13 games.

Marc-Andre Fleury allowed five goals on 31 shots on Saturday. Fleury has started each of Chicago’s last seven games, and with backup Kevin Lankinen still out with a hand injury, rookie backup Arvid Soderblom would get the nod if Fleury was rested.

Connor Hellebuyck started both of the Jets’ back-to-back games against the Dallas Stars and the Predators. Hellebuyck might start again against Chicago, but Winnipeg might want to give backup goalie Eric Comrie some action with another back-to-back coming Wednesday and Thursday (against the Minnesota Wild and Seattle Kraken).