Jets in must-win mode as they meet Senators 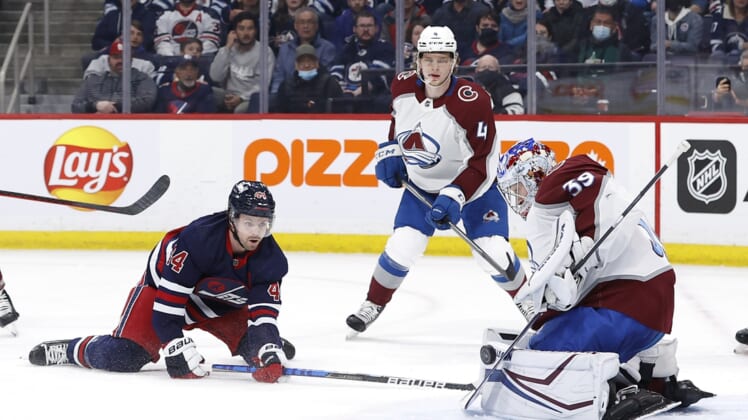 A four-game losing skid has the Winnipeg Jets down to their last out.

With 10 games remaining, the Jets (33-28-11, 77 points) go into Sunday’s road clash with the Ottawa Senators with no illusions about their situation.

The Jets, who are coming off a 5-4 overtime loss to the Colorado Avalanche at home on Friday, are seven points out of a playoff spot and essentially must win all 10 of their remaining regular-season clashes. Even if that happened, they likely would need some help.

“We understand the situation and where we are at in the standings,” defenseman Josh Morrissey said. “We had a conversation about not quitting and how we want to look at this next stretch of games here.

The loss to Colorado, which ended a winless three-game homestand, did have a positive. Winnipeg, which must vault three teams to be in the Stanley Cup tournament, erased a two-goal deficit in the third period to force overtime.

“That’s exactly how we’re going to have to play with this team moving forward. We did a lot of really good things. We defended hard. We kept a very good team, for the most part, on the outside.”

The Senators, who are on a two-game skid of their own, are coming off a 5-1 road loss to the New York Rangers on Saturday. Austin Watson’s goal 2:22 into the affair opened the scoring, but the Senators (26-39-6, 58 points) were thoroughly outclassed the rest of the game. Ottawa managed only three-first period shots and nine by the second intermission.

“We knew on the way in there was going to be some tough nights and today was one of them,” coach D.J. Smith said. “There was just not enough of what we usually have, our track, our compete, all of those things.”

Ottawa long has been eliminated from playoff contention, so the quest down the stretch is to assess players and develop a standard required for the Senators to climb the standings next season.

“We’ll turn the page like we do every night,” Smith said. “The other night, we deserved to win and we didn’t. (Saturday), we did not deserve to win. (Sunday) we’re going to play significantly harder.”

The Senators are hoping for a roster boost against the Jets with a pair of key forwards in Drake Batherson (illness) and Tim Stutzle (knee) expected to be back in the lineup from injury.

“We just didn’t play our game. We were playing slow, didn’t support each other very well. That played into their style of game well and we weren’t able to shut down their O-zone time,” veteran defenseman Nick Holden said. “We’ve got to make sure we get back to our style and our game, so we can give ourselves a chance to be successful.”