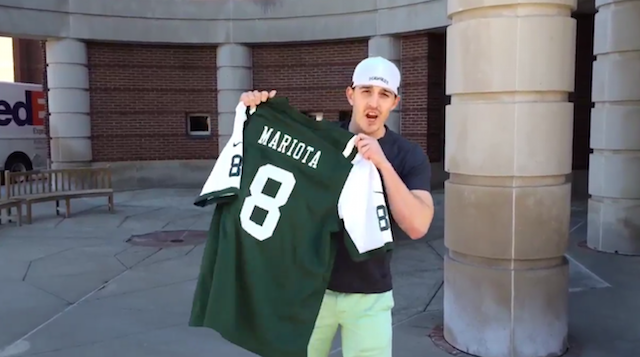 There are a couple rules when it comes to inking names.

Rule 1: NEVER put a significant other’s name on your body. I don’t care if he/she is the love of your life, just don’t do it. This also goes for inking up a team’s championship that has yet to happen.

Rule 2: Do not EVER put an athlete’s name on a jersey of any kind, because that athlete will be traded away the next day. It happens. It really does.

Not everyone listens to my rules, especially this New York Jets fan.

According to CBS Sports, Sam Fortier had “Mariota” printed on the back of a Jets jersey with the number eight.

If things do not go this fan’s way after the draft this week, he will just be that “guy with the New York Jets Mariota jersey.” Kinda like the guy with a San Francisco 49ers Aaron Rodgers jersey. We’re still wondering if that’s actually a thing.

Unfortunately for this fan, recent reports suggest that the Jets are planning to pass on Mariota, even if he is there with the sixth pick.