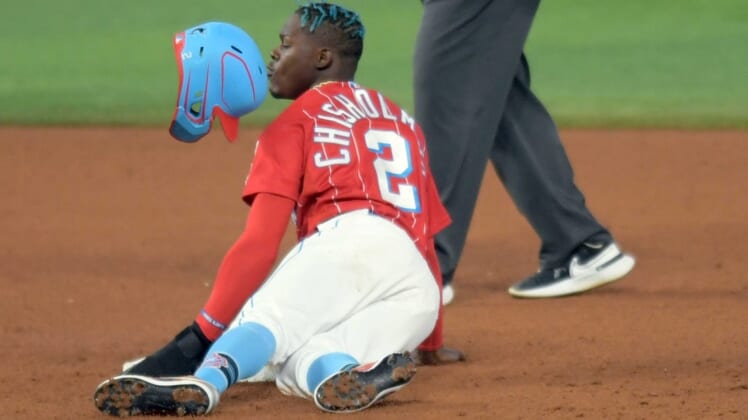 Sanchez began the comeback with an RBI double to spark a four-run fifth inning for the Marlins, who have won two of the first three games in the four-game series.

The Giants have lost three of four.

Jesus Aguilar legged out an infield single to lead off the ninth against Tyler Rogers (0-2) and was pinch-run for by Luke Williams. Avisail Garcia was then hit by a pitch on a 3-2 offering before Rogers balked before making his first pitch to Sanchez, whose fly out to center easily scored Williams.

Tanner Scott (1-0) earned the win with a one-hit ninth.

Sanchez scored the second run in the fifth on a throwing error by Giants catcher Joey Bart before Garrett Cooper laced a two-run single.

Jason Vosler homered in the third and Donovan Walton had a three-run double in the fourth for the Giants.

Vosler led off the third with a homer before the Giants extended their lead to 4-0 an inning later, when Joc Pederson doubled with one out and Brandon Crawford and Thairo Estrada drew back-to-back walks. Walton followed with his bases-clearing double.

Giants starter Logan Webb allowed just one hit through four scoreless innings before the Marlins tied the score in the fifth. Garcia led off with a single and scored on Sanchez’s double. Sanchez advanced to third on a single by Jon Berti and scored when Berti stole second as Bart’s throw bounced off Walton and skipped away.

Berti went to third on a groundout by Jacob Stallings and Jazz Chisholm drew a two-out walk to chase Webb, after which Cooper greeted John Brebbia with a two-run game-tying single.

Marlins starter Pablo Lopez was charged with four runs on four hits and two walks while striking out six over seven innings as his ERA rose from 1.83 to 2.18. He retired the final 11 batters he faced following Walton’s hit.

Webb allowed four runs on four hits and two walks while striking out six over 4 2/3 innings.