Jesus Sanchez drives in three to propel Marlins over Nationals 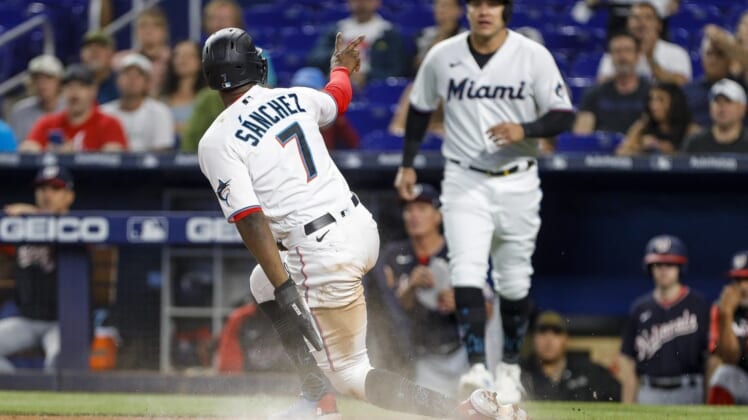 Jesus Sanchez, who missed Wednesday’s game due to back spasms, homered, doubled and drove in three runs, leading the host Miami Marlins past the Washington Nationals, 7-4, on Thursday night.

Miami spoiled the return of Nationals starter Stephen Strasburg, who hadn’t pitched in the majors since June 1 of last year due to thoracic outlet surgery. He allowed eight hits, two walks and seven runs in 4 2/3 innings, striking out five batters.

Trevor Rogers (3-5) won his first game since May 14 as the Marlins swept the three-game series. Rogers allowed six hits, one walk and two runs in five innings, striking out five.

Tanner Scott pitched a scoreless ninth to earn his fourth career save, including three this season, as Miami improved to 8-1 against Washington this year.

The Nationals scratched DH Nelson Cruz minutes before the start of the game, although no reason was given.

Miami opened the scoring with three first-inning runs. Jazz Chisholm Jr. started the rally with a bunt single, and Avisail Garcia drew a two-out, full-count walk. Sanchez then hit an RBI double off the glove of second baseman Ehire Adrianza, and Jon Berti followed with a two-run single.

Washington closed its deficit to 3-2 in the fifth. The Nationals loaded the bases on singles by Riley Adams and Victor Robles and a walk to Lane Thomas. With two outs, Juan Soto fouled off three straight pitches before slicing an opposite-field, two-run single to left.

However, Miami responded with four runs in the bottom of the fifth. Chisholm started the rally with a single, and he scored on Garrett Cooper’s double. Jesus Aguilar followed with an RBI single. Garcia then doubled, but Aguilar was thrown out at the plate.

Finally, Sanchez capped the rally by pulling his homer 417 feet to right.

The Nationals cut their deficit to 7-4 in the seventh. Luis Garcia drew a leadoff walk, and Robles was hit by a pitch. Thomas then hit an RBI double down the first-base line, and the second run scored on a throwing error by right fielder Avisail Garcia.