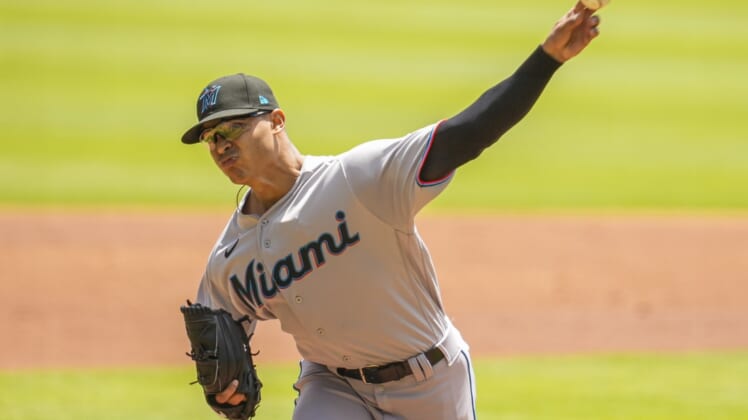 Jesus Luzardo pitched five strong innings and Garrett Cooper drove in a pair of runs to help the visiting Miami Marlins defeat the Atlanta Braves 5-4 on Sunday and win the rubber game of a three-game series.

Luzardo (1-1) allowed one run on two hits, four walks and eight strikeouts to record his first career win against Atlanta.

The bullpen supported Luzardo with three scoreless innings — Cody Poteet (one inning), Richard Bleier (1/3 inning) and Anthony Bass (1 2/3 innings). An important moment came in the seventh when Bass entered with the bases loaded and one out and got Austin Riley to hit into an inning-ending double play.

But Tanner Scott got in trouble in the ninth. He allowed a sacrifice fly to Matt Olson and a two-run homer to Riley, his fourth, and Atlanta cut the lead to 5-4. With closer Anthony Bender unavailable, Louis Head entered and allowed a double to Marcell Ozuna before striking out Adam Duvall and Eddie Rosario to end the game and earn his first career save.

Cooper was 3-for-4 with a double, a walk, two RBIs and one run scored. Joey Wendle and Jon Berti both added two hits and the last four hitters in the Miami order went 8-for-14 with four walks and four RBIs.

Atlanta starter Bryce Elder (1-2) allowed two runs on five hits, six walks and four strikeouts in 4 2/3 innings. He left after allowing and RBI double to Avisail Garcia and a run-scoring single to Cooper.

The Braves cut the lead to 2-1 in the bottom of the fifth when they scored their lone run against Luzardo. Atlanta loaded the bases and scored on Olson’s infield grounder, but failed to add more when Riley struck out swinging.

Miami got the run back in the sixth against reliever Darren O’Day when Berti tripled and scored on Jacob Stallings’ sacrifice fly to left field.

The Marlins scored twice against reliever A.J. Minter in the seventh on back-to-back run-scoring doubles by Cooper and Wendle.