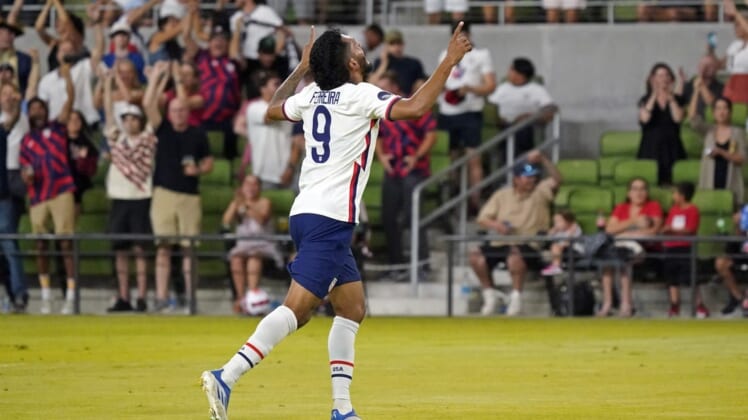 Jesus Ferreira scored four goals as the U.S. men’s national team opened defense of its CONCACAF Nations League title with a 5-0 victory over Grenada on Friday in Austin, Texas.

Ferreira put the U.S. ahead in the 43rd minute and followed with goals in the 54th and 56th minutes before FC Dallas teammate Paul Arriola made it 4-0 in the 62nd.

Brenden Aaronson set up Ferreira in the 78th in the U.S. team’s final home match before the Qatar World Cup in November. The USMNT is unbeaten in its past 26 home games.

Ferreira entered the match with three goals in 11 international matches, but he matched the program mark for most goals in one game. He joined Archie Stark, Aldo Donelli, Joe-Max Moore and Landon Donovan.

The U.S. is in the three-team Group D and will play at El Salvador on Tuesday. The Americans won the inaugural Nations League tournament in June 2021 with a 3-2 extra-time victory over Mexico.

Grenada, ranked 170th in the world, isn’t at the Mexicans’ level but nonetheless hung tough with the Americans until Ferreira broke through late in the first half.

He is tied with Jeremy Ebobisse for the Major League Soccer goal lead with nine.

Ferreira was a whirlwind in the opening half but was stymied by his inability to finish. He missed three glorious chances in a 0-0 tie with Uruguay on Sunday and had two more against the overwhelmed Grenadians before pouncing on a deflected ball and ripping a shot just before the break.

Through 45 minutes, the U.S. led in shots (12-0) and Ferreira had three of the four that went on target.

Any uneasiness about the outcome dissipated as Arriola found Ferreira to make it 2-0 in the 54th minute. Moments later, it was Ferreira again.

This time, Kellyn Acosta’s corner rolled to Ferreira, and he had an unmarked chance that he buried. Arriola added his 10th international goal, assisted by Luca de la Torre.