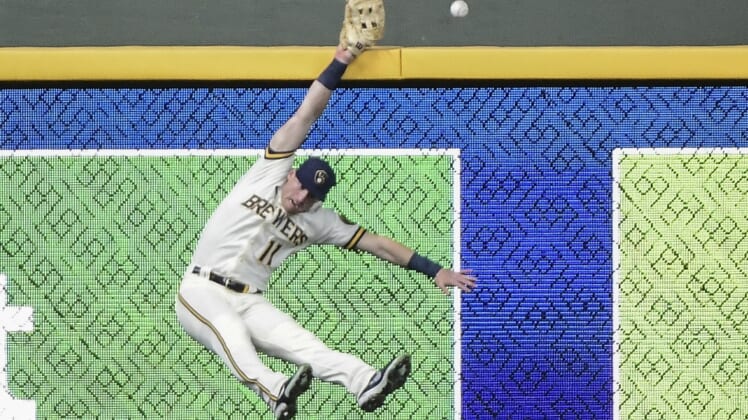 Sandy Alcantara allowed two runs over a season-high seven innings and Jesus Aguilar hit a home run for the fifth time in the past six games to lead the Miami Marlins to a 6-2 victory over the host Milwaukee Brewers on Wednesday afternoon.

The Marlins won two of three games at Milwaukee this week and are 3-4 on their current 10-game road trip which resumes Friday against the Washington Nationals.

Both runs Alcantara (1-2) gave up came on a third-inning home run by Kolten Wong. He allowed five hits and struck out four without issuing a walk on 93 pitches.

Wong caught up to a 92.2-mph slider from Alcantara and hit the ball 366 feet over the right-field fence to tie the game 2-all in the third inning.

But Aguilar put the Marlins back in front for good the following inning with a three-run home run to left field off Brewers reliever Eric Yardley. Marlins catcher Chad Wallach added two hits with an RBI.

Yardley allowed two runs on three hits over two innings in relief of starter Zack Godley (0-1), who struck out five and allowed only one hit, but surrendered three earned runs (four overall) and walked five. Godley left after three innings of his Brewers debut with a finger injury.

Left fielder Corey Dickerson exited with mild discomfort in his right groin while right fielder Garrett Cooper left the game after fouling a ball off his foot. X-rays were negative on Cooper and the Marlins listed both players as day-to-day.

The Marlins scored two runs in the second aided by an interference call by first-base umpire Marty Foster on Godley when he said he impeded Diaz’s path to first on an RBI groundout.

Brewers bench coach Pat Murphy was later ejected in the top of the fourth after Alcantara appeared to attempt a bunt, but no strike was called after an appeal to Foster at first base.