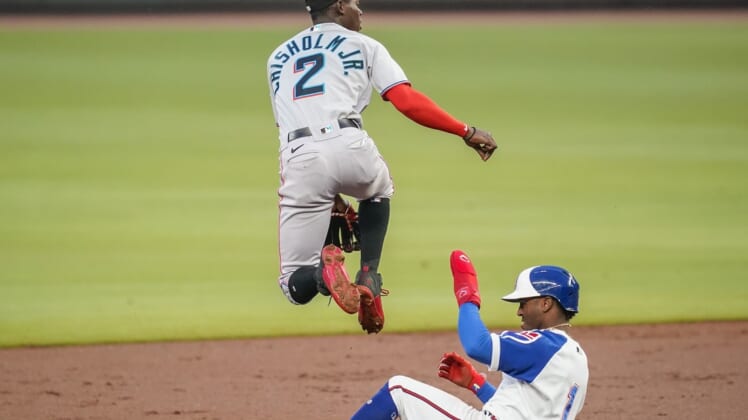 Jesus Aguilar’s double in the 10th inning drove in the go-ahead run and the visiting Miami Marlins hung on to beat the Atlanta Braves 6-5 on Wednesday to extend their winning streak to four games.

The Marlins will try for a sweep of the four-game series on Thursday afternoon.

Miami’s Starling Marte started the inning on second base and easily scored when Aguilar lined the double to left field against reliever Tyler Matzek (0-1). Aguilar was 2-for-5, scored a run and drove in two.

The Marlins improved to 2-0 in extra-inning games, while the Braves dropped to 0-3.

The winning pitcher was Jack Curtiss (2-0), who worked one scoreless inning and struck out one. Yimi Garcia pitched the 10th inning, and set the Braves down in order, including strikeouts of Ronald Acuna Jr. and Marcell Ozuna, to earn his second save.

The Braves wasted another outstanding effort from Acuna, who was 3-for-5, including a double and his fifth and sixth home runs. He scored three times and drove in four.

The Marlins scored a run in the second inning on a ground-rule double by Miguel Rojas. They made it 5-0 in the third on an RBI single by Aguilar and a three-run homer by Jazz Chisholm Jr., his second of the season.

The Braves began their comeback by scoring two runs in the third on Acuna’s first homer, a two-run shot that cut the lead to 5-2.

Freddie Freeman’s RBI single in the fifth cut the lead to 5-3, and Acuna’s second homer, a two-run blast to center field, tied the game in the seventh.