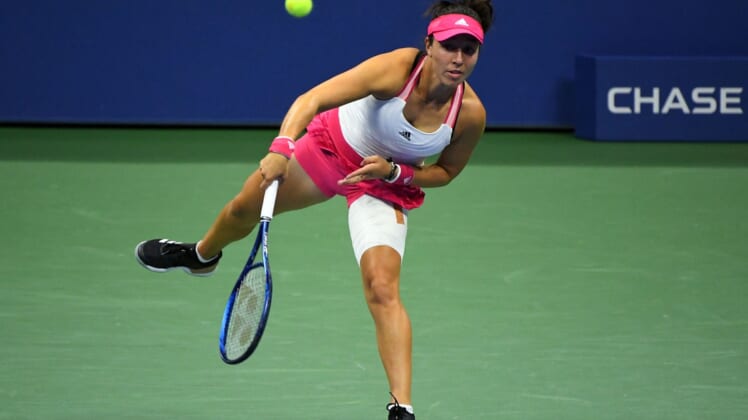 While Terry and Kim Pegula are well known in both the NFL and NHL, their daughter, Jessica, is starting to make a name for herself in tennis circles.

Jessica Pegula posted a 6-4, 3-6, 6-3 victory over fifth-seeded Elina Svitolina of Ukraine to advance to the quarterfinals of the Australian Open on Monday in Melbourne.

After her victory in 1 hour and 55 minutes, the 26-year-old American used a blue marker to write a message to her family — and her next opponent, Jennifer Brady — on a courtside camera.

“Hi Mom, Hi Dad. See you next (round). Jen B,” she wrote to her parents, who own the Buffalo Bills and Buffalo Sabres.

Pegula, who is ranked 61st on the WTA Tour, recorded 31 winners to secure her first career victory over a Top-10 player.

“I can’t get more confident,” she said, “It is my best result yet and I’m playing good tennis and today was a hard fought win, so, yeah, I’m feeling pretty good.”

Brady, in fact, used a blue marker to call out Pegula — her friend — after her match.

Brady then elaborated on Pegula’s accomplishment after he match.

“(I’m) super excited for her making her first Grand Slam quarterfinal. I know the emotions that she’s feeling. You feel like you’re on Cloud Nine,” Brady said of Pegula. “She’s playing great tennis. We have played before (Pegula won, 7-6 (5), 6-4 in the Western & Southern Open in 2020). I think we both know each other so well and I’m really looking forward to it. It will be a lot of fun.”

Also on Monday, Australian Ashleigh Barty advanced to the tournament’s quarterfinals for the third straight year with a 6-3, 6-4 win over another American, Shelby Rogers.

Barty, who is ranked No. 1 in the world, dismissed Rogers in 71 minutes. Barty had a much tougher time in their last meeting, a 7-5, 2-6, 10-4 victory in the quarterfinals of the Yarra Valley Classic last week.

“There were a couple of runs of points (and) games in our match last week that Shelby was able to get on a roll and run away with it a little bit,” Barty said. I wanted to try and avoid that and just bring it back on my terms as much as I could, and try and be the aggressor when I could.”

Barty advanced to face No. 25 Karolina Muchova of the Czech Republic. Muchova recorded her seventh straight win following a 7-6 (5), 7-5 victory over Elise Mertens of Belgium in 1 hour and 56 minutes.

Danielle Collins and Canada’s Bianca Andreescu each needed three sets to advance to the third round of the Phillip Island Trophy tournament in Melbourne.