Jesse James: Steelers were ‘Kardashians’ in 2018 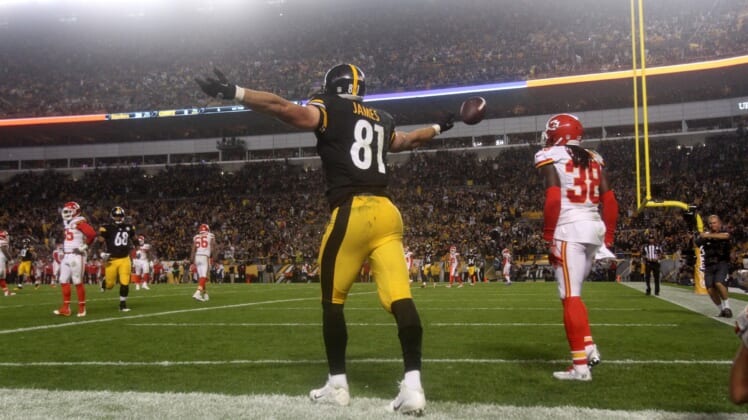 Jesse James naturally did not like how the season went for the Pittsburgh Steelers. He called his team out on Monday, making a rather sharp comparison.

The tight end, who’s set to become a free agent, likened his team to the Kardashian family.

“Ah man, we are — Kardashians. We have, I mean, we’re something,” James said, per Jacob Klinger of Pennlive.com. “It’s Le’Veon Bell issues, you have more stuff popping up weekly, Jeremy Fowler’s reporting stuff about Le’Veon every other week. There’s just people calling people out. … We were in the front of the ticker on ESPN too much for just reasons that weren’t related to football and not for us playing great ball. It was more distractions.”

Quite frankly, James is not wrong.

The issues with Bell were front and center for a good part of the season. But this issue wasn’t limited to the holdout running back.

Star receiver Antonio Brown didn’t play in Week 17’s must-win game against the Cincinnati Bengals. It was revealed on Monday that he had skipped a practice and had a dispute with a teammate, which led to the benching.

Additional drama came from Ben Roethlisberger. While he had a good season, Roethlisberger did make some critical mistakes. He wasn’t bashful about throwing teammates under the bus, either.

All things considered, it’s not surprising that Pittsburgh missed the playoffs this season. Come 2019, this will be something that the Steelers will need to get in check in a big way.