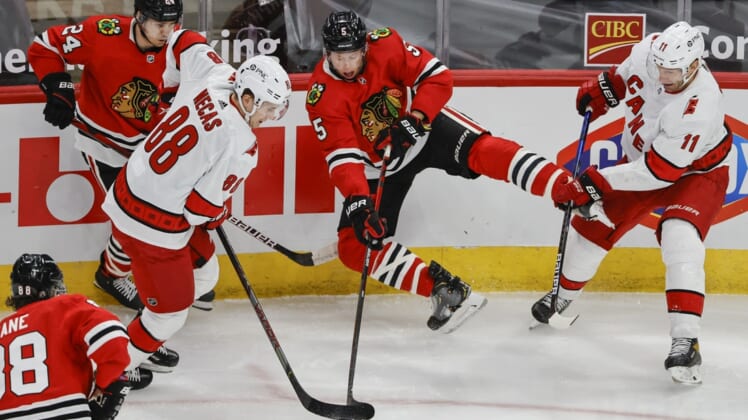 Jesper Fast scored with 29 seconds left in regulation to lift the Carolina Hurricanes to a 4-3 win against the Chicago Blackhawks on Thursday night.

Warren Foegele scored two goals on his 25th birthday, Vincent Trocheck had a goal and an assist, and James Reimer made 22 saves for Carolina, which has won four of five heading into an eight-game homestand.

Dominik Kubalik, Brandon Hagel and Dylan Strome scored, and Kevin Lankinen made 27 saves for the Blackhawks, who missed a chance to overtake the Nashville Predators for fourth place in the Central Division.

The Blackhawks beat the Hurricanes 2-1 on Tuesday.

The Blackhawks fell behind 2-0 before rallying to tie the score 2-2 on Hagel’s goal at 5:46 of the third period.

The Hurricanes came right back and retook the lead 3-2 at 6:54 when Foegele scored off the skate of Chicago defenseman Wyatt Kalynuk.

Strome tied the score again at 3-3 when he scored for the second straight game at 10:24.

Trocheck, playing in his second game since missing eight with an upper-body injury, gave Carolina a 1-0 lead at 9:48 of the first period.

He received a pass from Dougie Hamilton in the left circle, took a couple strides toward the net and scored on the far side on a wrist shot for his 14th goal of the season.

Trocheck has 27 points in the past 26 games, and at least one point in his past eight games (five goals, six assists).

Hamilton’s assist came one game after his 14-game point streak ended. It was the longest by a defenseman since Shayne Gostisbehere had a 15-game point streak for the Philadelphia Flyers during the 2015-16 season.

Nino Niederreiter spun and whipped the puck in front of the crease from below the goal line. Foegele swiped at the puck and it squeezed through Reimer’s pads and across the goal line.

Kubalik made it 2-1 at 15:21 of the second period. Kalynuk made a stretch pass to Kubalik cutting down the middle of the Carolina zone and he scored his 12th goal of the season.

Kalynuk also earned his first NHL point with the assist.