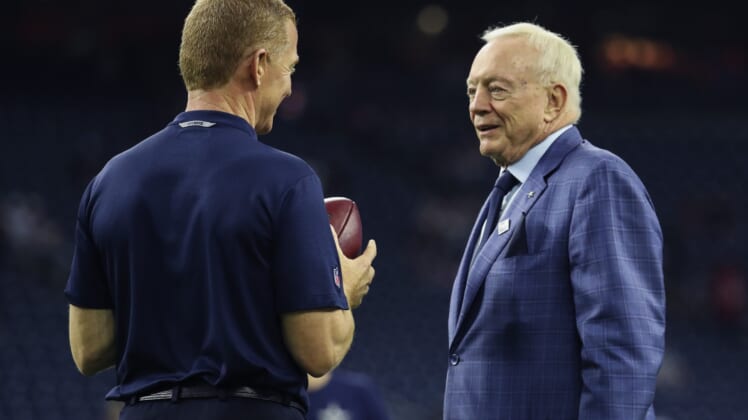 Jerry Jones is an eternal optimist, at least in public circles. At a time when most have concluded that Jason Garrett will bring the Dallas Cowboys nothing but more agony, Jones is doubling down on his support.

On Friday morning during an appearance with 105.3 The Fan, Jones laid it on thick.

“Jason Garrett is absolutely the real deal,” Jones said, per Jon Machota of the Dallas Morning News. “There’s no fraud in Jason Garrett. … Does he have some things he could do better? Of course. But what I think we have here is an asset that will get us where we want to go, which is a championship.”

The last think Garrett did that was noteworthy occurred on Sunday night, when his decision to punt on 4th-and-1 from the Houston Texans’ 41-yard line led directly to a Cowboys loss in overtime.

Over the course of his eight-plus years at the helm of the Cowboys organization, Garrett has compiled a record of 69-56 but has won just a single playoff game, going 1-2 in the postseason.

Getting to the playoffs twice in eight seasons isn’t great. Neither is the general sense that Garrett has continually failed to get the most out of his rosters.

That being said, we know Garrett has no desire to push Jones when it comes to power within the organization. In that, he’s exactly what Jones has long desired, which is why it wasn’t surprising to find out recently that Jones doesn’t have any interest in moving on.

So despite a lack of success, and an overwhelming sense from people who cover the sport for a living that the Cowboys need to move on, it’s not surprising that Jones has once again thrown his support fully behind his coach.