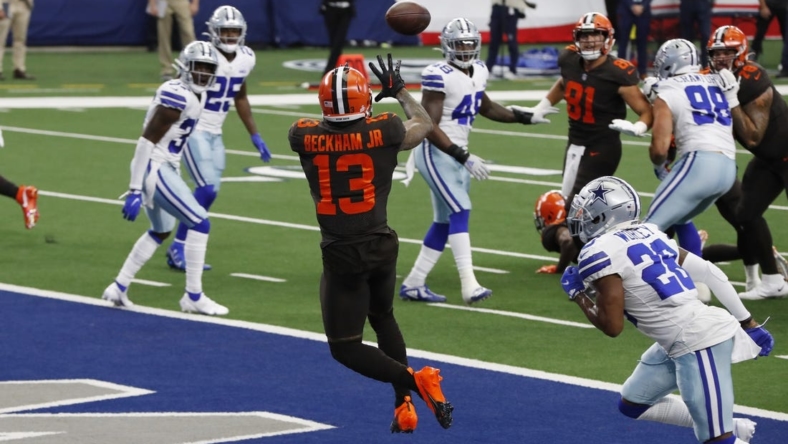 “Odell is someone that we have all the appreciation in the world for what he is as a competitor. I know the Cowboys star on that helmet when he puts it on could look pretty good,” Jones said Tuesday morning in a radio interview with 105.3 The Fan in Dallas.

Beckham Jr. is an unrestricted free agent and a familiar one to the Cowboys from his days wearing No. 13 for the New York Giants. His miraculous one-handed catch near the front, right corner of the endzone remains a popular highlight and happened against the Cowboys.

Jones was vocal about moving on from his previous No. 1 wide receiver in Dallas, Amari Cooper, saying his play didn’t match his pay.

CeeDee Lamb is in that role for the Cowboys after Cooper was traded to the Cleveland Browns in the offseason.

Beckham has been linked to multiple teams as he recovers from a torn ACL suffered during the playoffs. He exited the Los Angeles Rams’ win in the Super Bowl in February with the injury, but said recently he believes the tear took place before that game.

It’s unclear when he plans to sign and take the requisite physical, but NFL Network reported this week no decision is expected until around Thanksgiving.

Beckham tore the ACL in the same knee in 2020 with the Browns. He joined the Rams midway through the 2021 season. He was down to two teams: the Rams and Packers.

He caught a touchdown in the first quarter for the first score of Super Bowl LVI and finished with two catches for 52 yards as Los Angeles beat the Cincinnati Bengals 23-20.

The three-time Pro Bowl selection had 305 receiving yards and five touchdowns for the Rams in eight regular-season games.