Jerry Jones defends Dez Bryant: ‘He has a lot left in the tank’ 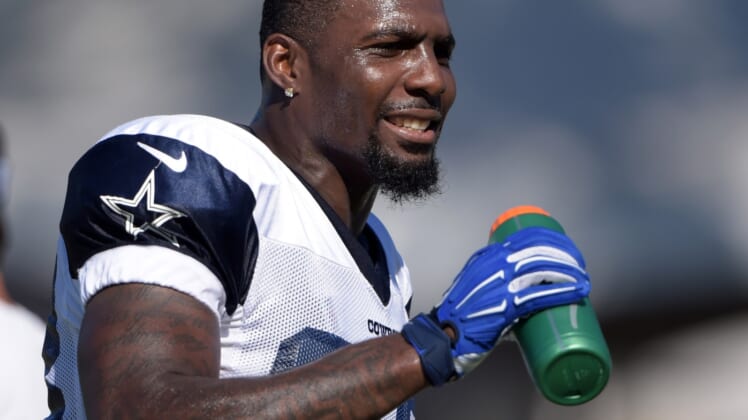 To many objective observers, Dallas Cowboys wide receiver Dez Bryant is not the same guy who tore up the league early in his career. In fact, it appears he’s hit a brick wall in terms of his explosive athletic abilities, and his production has taken a nose dive the past three seasons.

As the Cowboys prepare for their final game of the 2017 season, Bryant has registered just 66 catches for 814 yards and six touchdowns. He hasn’t sniffed double-digit receptions in a single game this year, nor has he come close to eclipsing the 100-yard mark. This also marks the third season in a row in which double-digit touchdowns and 1,000 yards receiving have eluded him for a season.

Still, Bryant has a staunch supporter in team owner, Jerry Jones, who opened up about the receiver Friday morning on KRLD-FM 105.3 The Fan (h/t Brandon George of SportsDay).

Jones said Bryant has been playing through tendinitis this past season and that he’s never been around a receiver who didn’t have some drops (Bryant had his fair share this year). Then Jones talked about how Bryant has matured and has a lot left to offer still on a physical level.

“Dez is passionate. I think Dez as far as his career is concerned I think he’s in the best place from the standpoint of maturity, from the standpoint of how he approaches the game, how he approaches people, which is a big part of this, I think he’s really at the tops I’ve seen since he’s been a Dallas Cowboy. He’s really evolved. I’m so proud of him.

“And I saw nothing this week in his comments. I know he doesn’t want to drop footballs. But I’ll tell you this, I’ve never heard of or seen or been around a receiver that didn’t drop some footballs. Those drops in the game were glaring this past weekend, but as far as his ability as far as his talent, I disagree, I think Dez has a lot, knowing him physically, I think he has a lot left in the tank.”

We’ve postulated that Dallas needs to make drafting an explosive receiver to play with Bryant next year should be a top priority. Oklahoma State product James Washington would be an excellent choice, though he’s certainly not the only one capable of making an immediate impact.

The Cowboys absolutely need to boost their receiving corps, however it happens. And they’d also be smart to realize Bryant’s best days are in the rear-view mirror. Also, finding Jason Witten’s long-term replacement couldn’t hurt, either. Dak Prescott took a significant step backward this season without enough support. And he’ll continue to struggle as long as his best receiver is Dez Bryant.