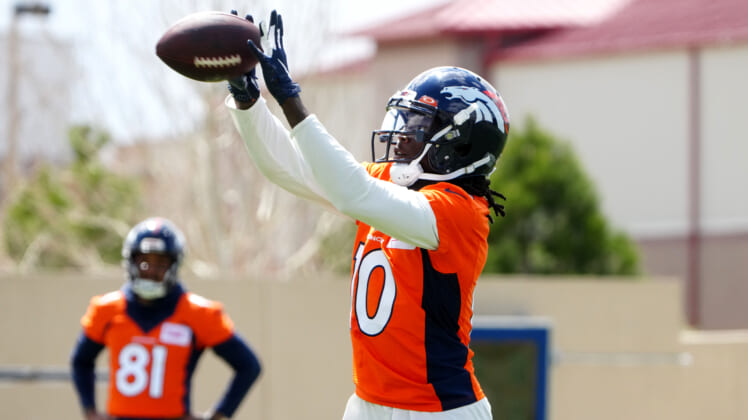 Denver Broncos wide receiver Jerry Jeudy appears to be in some hot water heading into his third NFL season.

Ryan O’Halloran of The Denver Post first reported that the Alabama product was arrested in Arapahoe County, Colorado, Thursday afternoon for unknown reasons.

According to the Arapahoe County Sheriff’s office, he was taken into custody between 11:30 AM and 12:30 PM. The office went on to report that Jerry Jeudy was arrested on charges of second degree criminal tampering with a domestic violence ehnancer, a misdemeanor. He’s currently on a no bond hold.

We’ll have more information on what these charges mean from both a criminal and football standpoint for the young wide reciever when they become available.

A first-round pick of the Broncos back in 2020, Jeudy has displayed flashes off brilliance on the field. As a rookie, he caught 52 passes for 856 yards and three touchdowns. Last season saw the Alabama product miss seven games to a high-ankle sprain.

The Broncos are set to rely on him and former Pro Bowl wide receiver Courtland Sutton to provide consistent targets for recently-acquired future Hall of Fame quarterback Russell Wilson.

Obviously, these latest developments regarding his arrest in Colorado will have an impact on that. It’s not a great thing given that general manager George Paton and Co. have gone all in to win this coming season.

As a developing story, we’ll have more information on this once it becomes available.