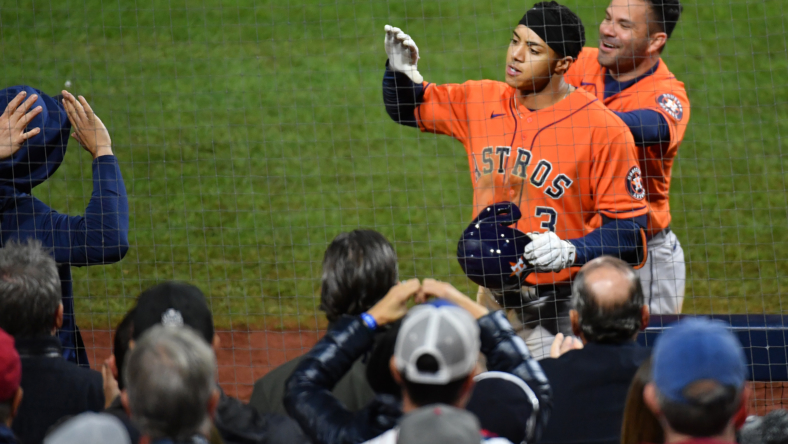 Pena has also been among the biggest stories thus far in the 2022 postseason after a stellar regular year for the American League champions.

Pena continued to live up to that legend during Game 5 of the World Series against the Phillies in Philadelphia Thursday evening.

With the game tied at one in the top of the fourth inning, the rookie nailed a solo home run off Noah Syndergaard to give the Astros a 2-1 lead.

It was not necessarily a majestic shot, traveling 350 feet at 102.1 miles-per-hour off the bat of Pena. But it was absolutely huge for a Houston team that’s looking to take a 3-2 series lead heading into Game 6.

A third-round pick of the Astros back in 2018, Pena earned the ALCS MVP as his Astros took out the New York Yankees. He hit .353 with two homers and four RBI in that series.

Thus far in the playoffs, the Dominican Republic native was hitting .300 with three homers, six RBI and a .907 OPS heading into Thursday’s game. This came after a tremendous regular-season performance from the infielder.

If the Astros do in fact end up earning the World Series title, Pena will obviously be among the primary reasons. And at just 25 years old, he has a great future ahead of himself in Houston. That’s for sure.