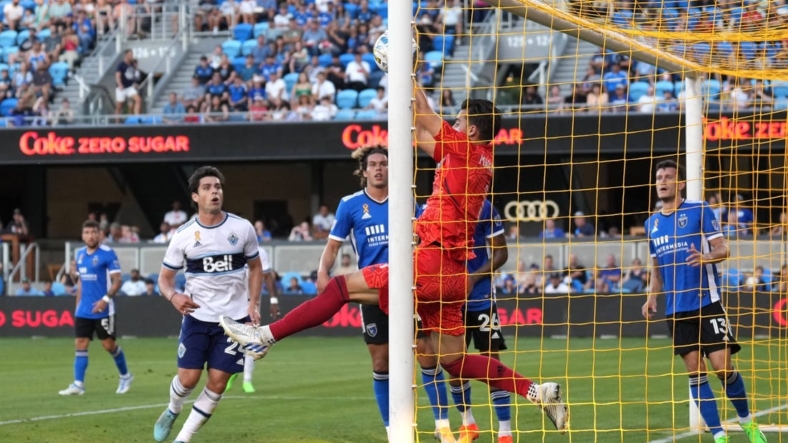 Jeremy Ebobisse and Jamiro Monteiro scored first-half goals and the San Jose Earthquakes held on for a 2-0 victory over the visiting Vancouver Whitecaps on Sunday night.

Cade Cowell, Jackson Yueill and Cristian Espinoza had assists as San Jose won for just the second time in its past nine matches (2-5-2).

JT Marcinkowski made six saves for his third shutout of the season for the Earthquakes (7-12-9, 30 points).

The Whitecaps (9-13-7, 34 points) slid into 10th place in Western Conference and are eight points behind the Portland Timbers, who are in seventh at the bottom of the playoff line. San Jose moved into a tie for 12th place.

Vancouver played without leading scorer Lucas Cavallini (eight goals), who received a red card and suspension for intentionally stepping on the head of Nashville SC’s Alex Muyl on Aug. 27.

Thomas Hasal made three saves for the Whitecaps.

Vancouver held a 15-9 edge in shots and put six on target to San Jose’s five.

Cowell set up San Jose’s first goal with a nice run upfield in the fourth minute. After entering the box, he sent a pass to his right that Yueill touched over to Ebobisse, who delivered a hard left-footed kick into the top left-hand corner of the net.

The goal was Ebobisse’s 15th of the season and third versus the Whitecaps.

The Earthquakes made it 2-0 in the 34th minute as Espinoza fed Montiero, who ripped a left-footed shot past Hasal for his fourth goal of the campaign. It was Montiero’s second against Vancouver this season.

The assist was the 12th of the season for Espinoza, one off his career best set in 2019.

Vancouver had a big opportunity in the 22nd minute off a corner kick when Ranko Veselinovic put a header on net. Marcinkowski knocked the ball upward with his right hand and then grabbed the ball with both hands to thwart the Whitecaps.

In the second half, Vancouver had several chances to cut into its deficit.

In the 59th minute, Brian White sent a close-range right-footed shot just wide to the right of the net. Three minutes later, Ryan Gauld’s left-footer narrowly missed to the left.

In the 68th minute, Julian Gressel drilled a right-footer from close range directly at Marcinkowski, who made the save.

One minute later, Tristan Blackmon put the ball into the net but he was ruled offside to negate the goal.