Jerar Encarnacion has blast in debut as Marlins top Mets 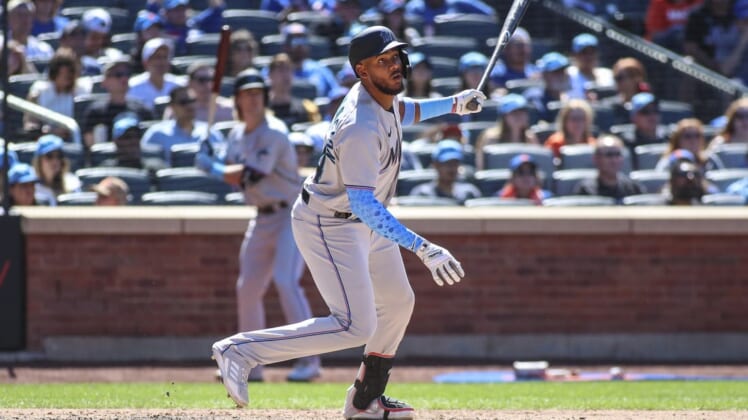 Jerar Encarnacion delivered a memorable first hit in his major league debut Sunday afternoon, crushing the go-ahead grand slam in the seventh inning to vault the visiting Miami Marlins to a 6-2 victory over the New York Mets.

Sandy Alcantara earned the win by tossing eight solid innings for the Marlins, who snapped a three-game losing streak. The Mets lost for the second time in seven games.

Alcantara and Mets starter Chris Bassitt were locked in a scoreless duel before New York took the lead on a three-pitch sequence against Alcantara with two outs in the sixth, when Starling Marte tripled and scored on Francisco Lindor’s single.

But the Marlins, who made Bassitt throw 22 pitches in the top of the sixth, wasted little time rallying in the seventh. Miguel Rojas hit a leadoff single and Lewin Diaz flew out before Jacob Stallings singled, and Bryan De La Cruz drew a walk to load the bases and chase Bassitt.

Encarnacion, who was recalled from Triple-A Jacksonville on Friday, then hit an opposite field line drive just beyond the right-field fence against Seth Lugo. The 24-year-old raised his right hand as he rounded first base and made celebratory gestures towards the Marlins’ dugout as he neared third base.

Encarnacion is the first Marlins player to hit a grand slam in his major league debut since Jeremy Hermida did it Aug. 31, 2005. Hermida’s grand slam was also his first big league hit.

The Marlins added another run in the inning with two outs, when Jazz Chisholm Jr. drew a walk and scored on a double by Jon Berti.

The Mets stirred in the bottom of the inning, when Jeff McNeil laced a leadoff double and scored on Luis Guillorme’s one-out single. But Alcantara retired the final five batters he faced, and the Marlins scored another insurance run in the top of the ninth on Chisholm’s RBI double.

Alcantara (7-2) allowed six hits and one walk while striking out eight in going at least eight innings for the sixth time this season.

Bassitt (5-5) allowed the three runs on five hits and two walks while striking out nine.