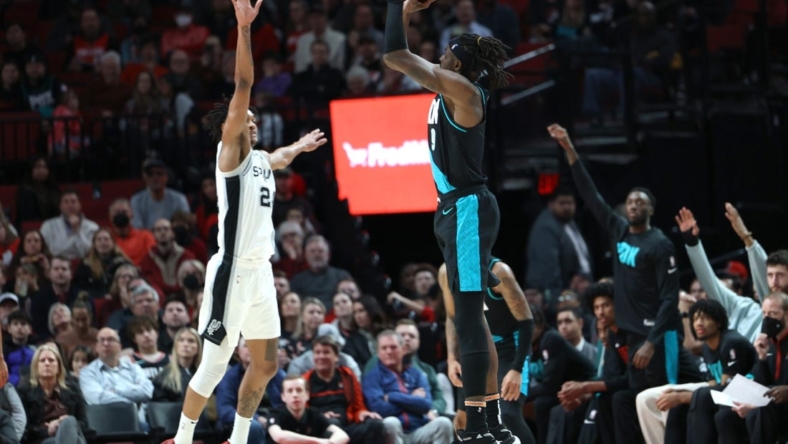 Jerami Grant recorded 29 points and eight rebounds to lead the Portland Trail Blazers to a 117-110 victory over the visiting San Antonio Spurs on Tuesday night.

Anfernee Simons scored 23 points and Damian Lillard added 22 points and 11 assists as Portland won for the 10th time in 14 games to start the season. Shaedon Sharpe scored 13 points off the bench as the Trail Blazers snapped a four-game skid against San Antonio.

Jakob Poeltl scored a career-best 31 points and collected 14 rebounds for the Spurs, who lost for the seventh time in the past eight games.

Portland shot 51.9 percent from the field and made 15 of 32 from 3-point range. Grant knocked down six 3-pointers and Simons made five.

Keita Bates-Diop added 10 points for the Spurs, who hit 51.8 percent of their shots and were 9 of 29 from behind the arc. Johnson and Vassell each made four 3-pointers.

San Antonio took its first lead of the second half when Poeltl scored in the interior for a 94-93 edge with 10:55 remaining.

San Antonio again led by six before Portland rattled off 10 straight points to take a 110-106 lead. Drew Eubanks converted a three-point play to put the Trail Blazers ahead and Lillard followed with a 3-pointer to conclude it.

Josh Hart’s steal and dunk gave Portland a 115-110 lead with 1:21 left and Simons later sealed it with two free throws with 28.7 seconds to play.

Grant had 19 first-half points as Portland led 62-56 at the break. Vassell scored 16 in the half for San Antonio.

The Spurs started fast with Poeltl scoring seven straight points for a 16-4 lead. Portland later used a 16-5 burst to move ahead by one and was up 30-29 at the conclusion of the quarter.

San Antonio began the second quarter with an 11-2 run to take a 40-32 lead. But the Trail Blazers controlled the rest of the quarter to take the six-point halftime advantage.

Portland led 81-73 after Lillard made a jumper with 6:27 left in the third quarter and eventually took a 93-89 edge into the final stanza.