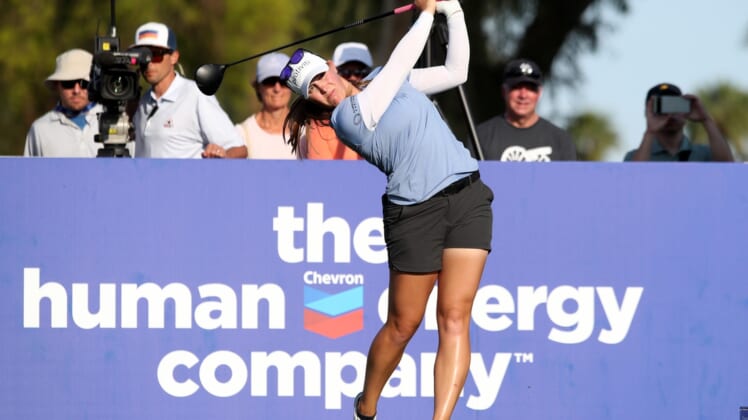 Jennifer Kupcho fired an 8-under-par 64 to open a six-shot lead Saturday in the third round of The Chevron Championship in Rancho Mirage, Calif.

Second-round leader Hinako Shibuno of Japan struggled mightily, shooting 77 to fall into a tie for 21st.

Kupcho, who is looking for her first win on the LPGA Tour, shared the lead after Thursday’s first round and was tied for second after 36 holes. But she came out blazing on Saturday, with birdies on eight of her first 12 holes. After her only bogey of the day — on No. 13 — she birdied No. 17 to finish at 64.

“It was a really fun round out there. It was nice to see the putts start falling,” Kupcho said. “After yesterday, I wasn’t so sure. It was really fun, and I’m excited.”

Patty Tavatanakit of Thailand, the defending champion who also was among the players tied for second beginning the day, fired a 2-under 70 and is alone in second place at 10-under 206. Another stroke back in third is Jessica Korda, who shot 67.

Despite Kupcho’s big lead, Korda wasn’t conceding the tournament to her.

“It’s a major so you know the girls up front are going to be nervous, and we’re kind of chasing them down and they know that. You always just kind of got to think that you have a chance no matter, and that’s kind of the mentality you got to go in there with,” Korda said.

Annie Park finished with more bogeys (3) than birdies (2) en route to a 73. She is alone in fourth place at 7 under.

Australia’s Minjee Lee shot 73 for the second straight day to tumble to 4 under for the tournament and tied for 21st.

Faring even worse was second-round leader Shibuno. Her struggles included two double-bogeys and two bogeys in a span of eight holes, and the round included two birdies.

Kupcho said she didn’t worry about the other players on Saturday and doesn’t intend to do so Sunday either.

“I didn’t really look at scoreboards out there. The first time I looked was on 13 to see who was in second, and it was Patty. Other than that, I’m just out there playing my game. … I can’t control what anybody else does (on Sunday). Someone can go out and do what I did today. Props to them if they do, and I’m just going to go out and play my own game.”