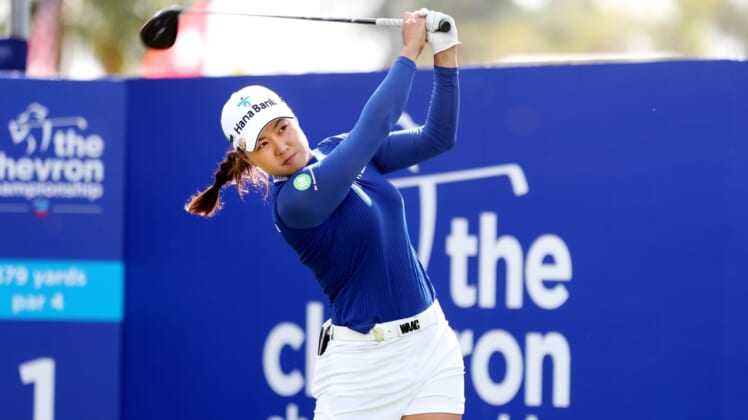 Jennifer Kupcho and Australia’s Minjee Lee share the first-round lead at the first major of the LPGA season, the Chevron Championship, after opening with 6-under-par 66s Thursday at Mission Hills Country Club in Rancho Mirage, Calif.

Lydia Ko of New Zealand, ranked No. 3 in the world, headlines a pack of six golfers tied for fourth at 4-under 68. She is tied with Australia’s Gabriela Ruffels, England’s Georgia Hall, Sweden’s Anna Nordqvist, Germany’s Caroline Masson and Thailand’s Pajaree Anannarukarn.

Kupcho went as low as 8 under through 14 holes after ripping off four consecutive birdies, but a pair of bogeys at the par-4 15th and 16th holes brought her back to earth a bit.

“I really like the layout of this golf course, the beautiful shape that it’s in every year,” Kupcho said. “It always is so fun to be here, so just taking advantage of how much I like the course and the atmosphere.”

While Kupcho is still searching for her first LPGA Tour win of any variety, Lee broke through for her first major title at last July’s Evian Championship in France.

Lee began Thursday on the back nine and birdied three of her first five holes to get off to a stellar start.

“My second birdie I had (at the par-4 13th), it was like kind of weaved through the trees because I hit the cart path and went a little bit left, so that was a nice birdie,” Lee said.

The major is going by a new name this year after previously being known as the Nabisco Dinah Shore, the Kraft Nabisco Championship and the ANA Inspiration. Chevron increased the total purse to $5 million, with the winner being paid out $750,000, but the tournament will move the major away from its iconic California desert home next year.