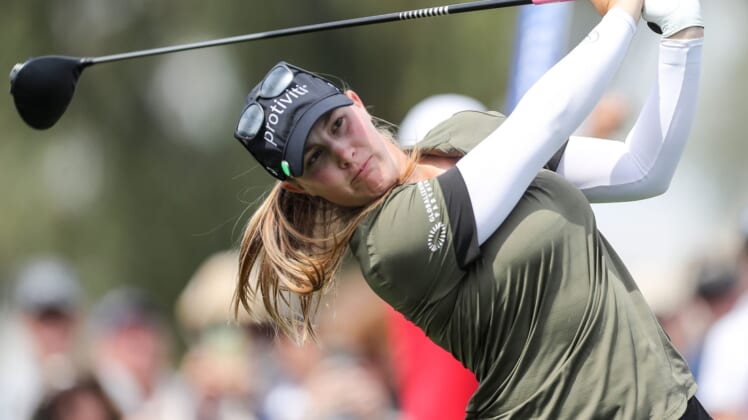 Jennifer Kupcho’s first win on the LPGA Tour was a major breakthrough.

Kupcho hung on through a nervy back nine Sunday to win by two shots the Chevron Championship at Mission Hills Country Club in Rancho Mirage, Calif.

Kupcho entered Sunday with a six-stroke lead, and her 2-over-par 74 in the final round was still enough to stay ahead of the pack. She posted a 14-under 274 for the week, two better than second-place Jessica Korda.

The victory at the first major of the LPGA season included a traditional leap into Poppie’s Pond near the 18th green, though hers will be the last such plunge. The event previously known as the Nabisco Dinah Shore, the Kraft Nabisco Championship and the ANA Inspiration will move to Houston next season, leaving its iconic home in the California desert.

Prior to Sunday, Kupcho’s most notable win came as an amateur, when she won the inaugural Augusta National Women’s Amateur in 2019. She said on the Golf Channel broadcast that she had doubts whether her professional breakthrough would come.

“Yeah, for sure,” Kupcho said. “I’ve been so close a couple of times, so it’s just really hard sometimes, and here I am. It’s really exciting.”

Kupcho played her first seven holes in 2 under before picking up a bogey at the par-3 eighth, her second of the round. She started to teeter early on the back nine and slipped back to the pack with bogeys at Nos. 10, 13 and 14.

After recovering with a birdie at No. 15 that brought her to 16 under, Kupcho misfired on the par-3 17th tee, landing in thick rough. She would two-putt for bogey. At the par-5 18th, she made the green in three before three-putting, but by then the victory was in the bag.

Korda eagled the par-4 third hole when her second shot, from rough on the right of the fairway, landed on the front of the green and rolled right to left to the pin. But the rest of her front nine was made up of pars.

The sister of world No. 2 Nelly Korda fought through back spasms that required some medical attention in the middle of her round. She minimized mistakes and posted a 3-under 69.

Taking third place was Slovenian 18-year-old Pia Babnik, who shot up the leaderboard Sunday with a 6-under 66. Babnik eagled the par-5 second hole and added five birdies and only one bogey.

Babnik and Japan’s Hinako Shibuno, the 36-hole leader, tied for the low round of the day. Shibuno tied for fourth at 10 under with defending Chevron champion Patty Tavatanakit of Thailand (72), France’s Celine Boutier (67) and Lexi Thompson (68).