Jeff Hornacek: Up for Carmelo Anthony to decide if he’ll return to Knicks 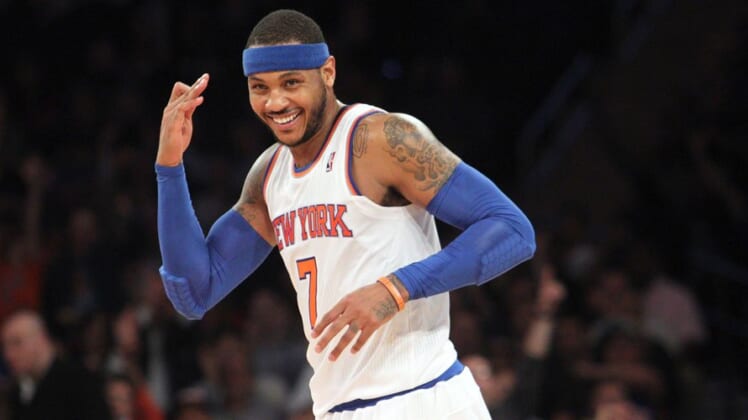 With another miserable season winding down, New York Knicks coach Jeff Hornacek addressed the team’s future with Carmelo Anthony. Hornacek noted that while he’s planning on having Anthony on the roster for the 2017-18 season, it’s ultimately up to Carmelo to decide if he’s coming back.

“I think it’s all his choice still, isn’t it, with his contract?” Hornacek said, per Al Iannazzone, Newsday. “I think every year until guys are gone, coaches, we all assume we have the same team. That’s how you prepare. When something changes you deal with it.”

Hornacek is partially right. If Anthony wants to stay in New York, then he can do just that. A full no-trade clause gives him that right. But even if Carmelo wants to leave, the Knicks still have to find a trade that they deem worthwhile. Oftentimes, that’s easier said than done.

A trade makes sense. The Knicks are a long way from winning and Anthony is nearing the end of his career, or certainly his prime. While his relationship with Jackson deteriorated seemingly before our eyes, the forward was linked to many teams around the trade deadline including the Cleveland Cavaliers, Boston Celtics, and Los Angeles Clippers, all of whom are playoff teams.

Additionally, while Anthony has enjoyed individual success, the team has not followed suit. Carmelo was dealt to New York during the 2010-11 season and the team made the playoffs that season, as well as each of the next two. But those three postseason trips generated only one series win. The Knicks are now in the midst of a four-year postseason drought.

Considering that, a split in the off-season would seem to be a good thing for all parties involved.