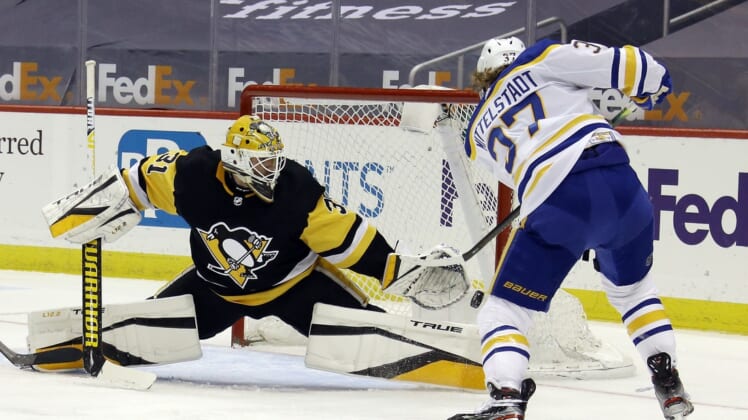 Jeff Carter scored and goaltender Maxime Lagace stopped all 29 shots he faced Saturday to lead the Pittsburgh Penguins past the visiting Buffalo Sabres 1-0 as both teams concluded the regular season.

Pittsburgh (37-16-3, 76 points) clinched at least second place in the East Division and home-ice advantage for the first round of the playoffs. The Penguins could still win the East, but are waiting to find out where they will finish based on other playoff teams in the East with regular-season games remaining.

It was Lagace’s first career shutout in his 18th game, his first game with Pittsburgh.

With top two goaltenders Tristan Jarry and Casey DeSmith out because of apparently minor injuries – Penguins coach Mike Sullivan said they would be available for the playoffs – Lagace was making his first NHL start since Feb. 1, 2019.

Buffalo rookie goalie Michael Houser, pressed into the No. 1 role because of a series of injuries, was making his fourth career and fourth straight start, the final two near the Pittsburgh suburb where he grew up and played youth hockey. He made 22 saves.

Houser helped keep the game scoreless in the first period with a highlight save on Penguins winger Jake Guentzel. Facing Guentzel’s two-on-one with Sidney Crosby, Houser stretched to his right and into a full split to get his pad on Guentzel’s shot.

Carter, who had a career-high four goals in Thursday’s 8-4 Pittsburgh win over Buffalo, gave the Penguins a 1-0 lead at 1:58 of the second with his 399th career goal.

Linemate Frederick Gaudreau stole the puck along the end boards and centered it toward Carter, who was heading to the net. The puck banked off Carter’s chest and past Houser.

Buffalo had a 24-9 shots advantage after two periods despite trailing by the one goal.