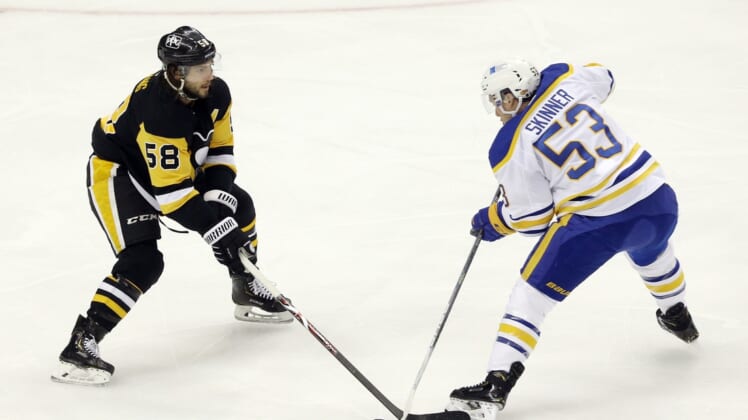 Jeff Carter scored a career-high four goals Thursday as the Pittsburgh Penguins jumped back into first place in the East Division with an 8-4 win over the visiting Buffalo Sabres.

Jared McCann added a goal and two assists, Sidney Crosby and Kasperi Kapanen a goal and an assist each, Brian Dumoulin scored, Frederick Gaudreau had three assists, and Kris Letang and Jason Zucker two assists each for the Penguins (36-16-3, 75 points).

Drake Caggiula scored twice, Tage Thompson and Jeff Skinner each had a goal and assist, and Rasmus Ristolainen had two assists for the Sabres (15-33-7, 37 points).

Michael Houser, in his third career start, all this week, made 26 saves in his first loss.

Caggiula gave the Sabres a 1-0 lead at 2:45 of the first on a short-side from the left dot.

Pittsburgh tied it seven minutes after Carter got a shot behind Houser. Defenseman Ristolainen swiped the puck away and play continued. It took officials looking at replays to determine the puck had crossed the goal line at 9:57 of the first.

Carter struck again at 11:39 of the first on a power play, converting McCann’s touch pass for a one-timer and a 2-1 Penguins lead.

At 3:32 of the second, Thompson scored off a cross-ice pass from Casey Mittelstadt for a 2-2 tie.

Carter notched his seventh career hat trick in the regular season at 4:36 of the second, off a rebound of Marcus Pettersson’s shot. Carter also has two hat tricks in postseason play.

Buffalo scored its third goal on its eighth shot, at 5:13 of the second, to tie it once more on Caggiula’s lofted shot.

After Crosby won a faceoff, Dumoulin scored from the left point for a 4-3 Pittsburgh lead at 6:26 of the second.

Just 49 seconds later McCann’s rising shot from the top of the slot gave the Penguin a 5-3 edge.

Carter lifted a backhander past Houser’s glove at 3:02 of the third to boost it to 6-3.

Crosby made it 7-3 when he redirected a shot by Letang at 6:25 of the third, and Skinner answered at 9:49 on the power play.