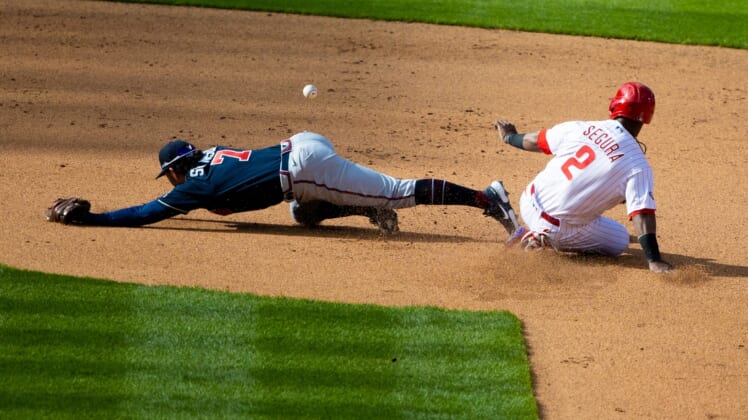 Jean Segura hit the game-winning single to left field with two outs in the bottom of the 10th inning to score Bryce Harper and lift the host Philadelphia Phillies past the Atlanta Braves 3-2 on Opening Day Thursday.

Segura and J.T. Realmuto had two hits apiece for the Phillies, who won a walk-off on Opening Day for the first time since 2011.
Phillies starter Aaron Nola allowed six hits and two runs in 6 2/3 innings. Nola struck out six and walked none.

The Phillies jumped out to a 1-0 lead when they loaded the bases with one out in the first inning and Alec Bohm hit a sacrifice fly to left field, scoring Andrew McCutchen.

In the third, the Phillies went ahead 2-0 after Realmuto’s infield single scored Rhys Hoskins from third.

The Braves managed only two hits through the first four innings –a double by Acuna and a single by Marcell Ozuna.

Atlanta had runners on second and third with one out in the sixth, but Ozuna lined out to Bohm at third. Travis d’Arnaud then struck out looking to end the threat.

In the seventh, Sandoval launched a two-run pinch hit home run to right on an 0-2 pitch from Nola to tie the game at 2.

The Braves loaded the bases with two outs against Jose Alvarado in the eighth, but Cristian Pache struck out swinging on a 100-mile-per-hour fastball.

Ozzie Albies tried to score on a sacrifice fly in the 10th, but center fielder Roman Quinn threw in time to Realmuto, who applied the tag to end the inning.