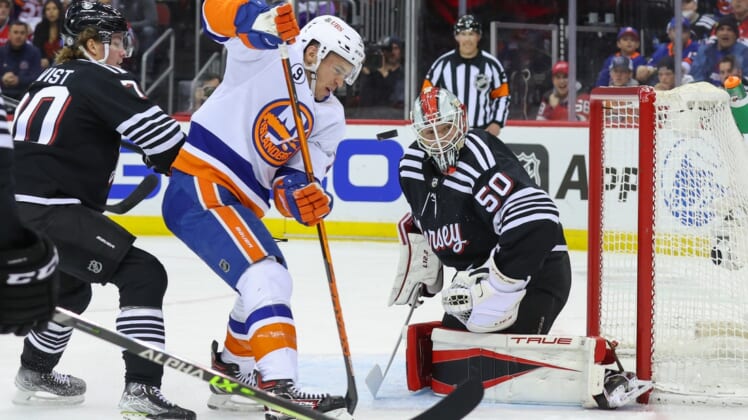 Jean-Gabriel Pageau scored a natural hat trick Sunday afternoon for the New York Islanders, who maintained their late-season surge by hanging on to edge the host New Jersey Devils, 4-3, in Newark, N.J.

The hat trick was the second of Pageau’s career and his first since he did it in Newark against the Devils for the Ottawa Senators on Nov. 13, 2019. It was also the first natural hat trick for the Islanders since Mathew Barzal scored three straight goals in the third period of a 4-0 win over the Toronto Maple Leafs on Dec. 29, 2018.

Devils center Jack Hughes exited in the second period with what looked like a lower-body injury after he absorbed a check from Oliver Wahlstrom. Hughes missed about four minutes of action and returned for one shift before exiting for good after he fell to the ice while trying to pivot.

Pageau scored twice in a span of a little more than two minutes late in the first. He bore in on Daws and buried a shot between his legs with 8:04 left before putting back a skittering puck in the crease for a power-play goal with exactly six minutes remaining.

Pageau won a faceoff against Hischier deep in the Devils’ zone before he headed to the crease, took a pass from Adam Pelech and tapped the shot into the wide open corner of the net beyond Daws’ glove side with 5:02 left in the second.

The Devils began their comeback just 47 seconds later, when Boqvist redirected a slap shot from just in front of the blue line by Damon Severson. Tatar cut the deficit to one 5:32 into the third when his shot from the middle of the slot sailed over Schneider’s outstretched glove.

Palmieri extended the lead back to two goals with 5:07 left. Daws was pulled with a little under three minutes left and Hischier scored with 1:06 remaining. Schneider preserved the win by turning back a shot by Hischier 32 seconds later.