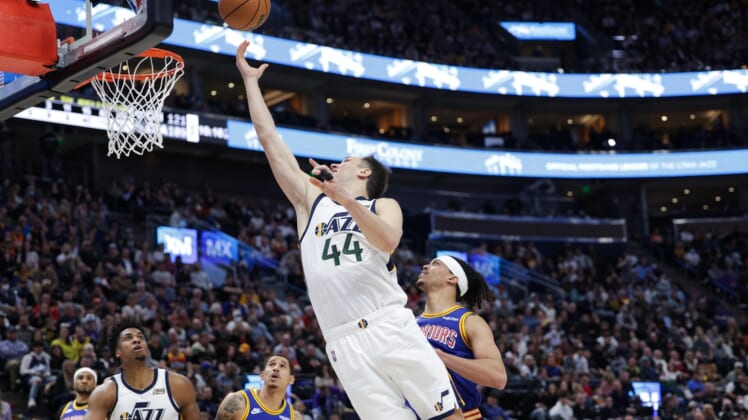 Two teams in search of momentum-building efforts, while on the cusp of the postseason, will go head-to-head Saturday night when the Utah Jazz visit the Golden State Warriors at San Francisco.

Before taking their respective home courts at midweek, the Jazz (46-31) and Warriors (48-29) had been struggling to the point where home-court advantage in the first round of the playoffs was no longer a sure thing. The honor comes attached to a top-four finish in the Western Conference.

In fact, losing five straight dropped the Jazz all the way to fifth in the West. Even after a 122-109 win Thursday over the Los Angeles Lakers, they currently find themselves dueling the Denver Nuggets to avoid falling another notch.

Meanwhile, Golden State has dropped four in a row. With a loss on Saturday, the Warriors would not only fall within one game of the Jazz, but probably would lose a tie-breaker based on conference record.

Like the Jazz, the Warriors got a boost of confidence this week in a competitive loss to Western power Phoenix on Wednesday, a 107-103 nail-biter they led in the final minute.

“We don’t do moral victories around here. We’ve won way too much to have moral victories,” Warriors veteran Draymond Green assured before turning his analysis in a positive direction. “But tonight we found ourselves. We found our competitive spirit. We found our defense. It’s something we can build on.”

Jordan Poole matched his career-high with 38 points, but it was the return of defensive ace Andre Iguodala for a second consecutive game that was the key in Golden State limiting the high-scoring Suns to 107 points after having surrendered 121, 123 and 123 in their previous three games, in which they were drubbed by a combined total of 47 points.

The Warriors have beaten the Jazz two of three in the 2021-22 campaign, but the results demonstrate the changing fortunes of the Golden State season.

The Warriors won 123-116 at Utah on Jan. 1 while they had one of the best records in the NBA. They held on for a 94-92 home win over the Jazz later that month as their early form was starting to erode and they were crushed 111-85 at Utah Feb. 9 as they began their fall into the Western pack.

The Jazz’s big pieces started falling back into place Thursday against the Lakers, with Donovan Mitchell (29), Rudy Gobert (25), Jordan Clarkson (19) and Mike Conley (18) all making an impact. Each made at least half their shots on a night when the Jazz finished at 51.1 percent.

“There’s not a sense of panic with this team,” Clarkson said. “You’re gonna lose games in the NBA. All the teams — maybe minus one, the Phoenix Suns — have had that happen to them this year. It’s just part of the season.”

Utah has more to lose Saturday than the Warriors, who can clinch a playoff spot with a win. The Jazz, meanwhile, need a win to keep safe distance between themselves and current seventh-seeded Minnesota in an effort to avoid the Western Conference play-in tournament.