Jazz slip past Nuggets behind 36 from Bojan Bogdanovic 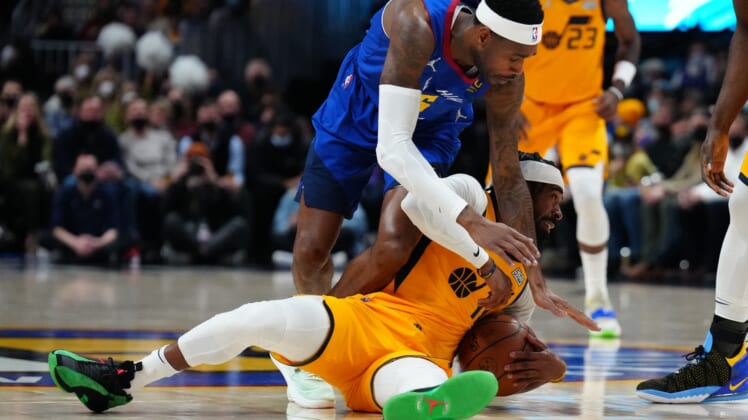 Bojan Bogdanovic had a season-high 36 points and a career-best 13 rebounds, Rudy Gay scored 18 points and the visiting Utah Jazz beat the Denver Nuggets 115-109 on Wednesday night.

Nikola Jokic notched his 64th career triple-double with 26 points, 21 rebounds and 11 assists, Monte Morris and Will Barton scored 20 points each and Aaron Gordon had 17 points for Denver.

The Nuggets were again without head coach Michael Malone as well as Jeff Green and Zeke Nnaji due to health and safety protocols. Assistant Popeye Jones served as the acting head coach for the third straight game.

The Jazz played without Rudy Gobert to do inflammation in his left shoulder and Joe Ingles entered health and safety protocols Tuesday. He is the first Utah player to be placed on the list this season.

The Jazz led by as many as eight in the second quarter. Denver briefly took a lead but Utah held a 57-56 advantage into halftime.

The Jazz opened the third quarter on a 13-4 run to go ahead 70-60. Barton drained a 3-pointer but O’Neal answered with one behind the arc. Bogdanovic and Mitchell made layups to make it 77-65 and prompt a Nuggets timeout.

Jokic scored the next eight points for Denver to cut the deficit to 80-73 but Bogdanovic hit two short jumpers and four free throws to stretch the lead to 88-78 entering the fourth quarter.

Clarkson hit the first bucket of the final period to extend the lead to 12 again. But the Nuggets got the deficit under double digits on a Barton jumper, and made it 94-88 on a layup by Morris with 8:20 left.

The Jazz committed two turnovers and Morris hit a 3-pointer to get Denver within three. Clarkson hit a corner 3-pointer, Bogdanovic made a short hook and O’Neal and Gay hit 3-pointers during an 11-4 run to make it 105-95, and Utah closed it out.