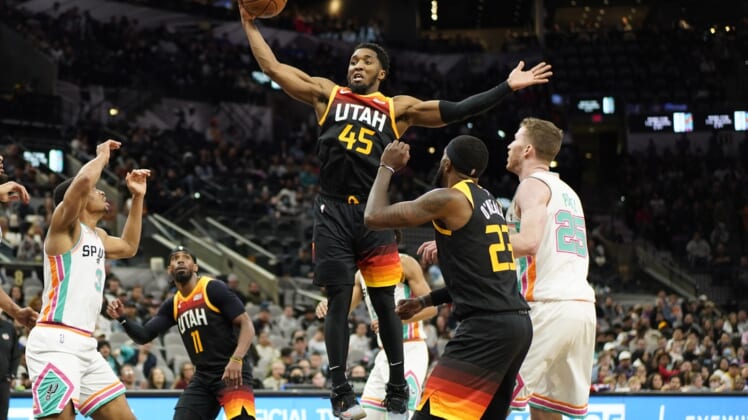 The Utah Jazz, who will host the Sacramento Kings in Salt Lake City on Saturday night, have been part of NBA history on a couple of occasions this week.

The most recent historical event they witnessed happened Friday night in San Antonio as they blew a double-digit lead in the fourth quarter of a 104-102 loss.

The Spurs’ victory gave Gregg Popovich his 1,336th career victory as a head coach, putting him in sole possession of the most coaching wins in league history. He had been tied with Don Nelson. Late Jazz coach Jerry Sloan is fourth on the wins list with 1,221.

In his pregame remarks, Jazz coach Quin Snyder lauded his former mentor — Snyder was a D-League coach under Popovich as he climbed the NBA coaching ladder — for creating strong relationships.

“They don’t keep records for wins for those,” Snyder said, “but I would think he broke the record for those a long time ago.”

Donovan Mitchell had 24 points, seven rebounds and six assists, and Rudy Gobert posted 16 rebounds, 13 points and five blocked shots. But the Jazz went scoreless for more than half of the third quarter and blew a 15-point lead in the fourth quarter as the Spurs vaulted to the historic win with an 18-3 run.

Hassan Whiteside also had a double-double off the bench with 13 points and 10 rebounds, and Jordan Clarkson contributed 17 points and eight boards in his reserve role.

“None of us coach for records,” Popovich said. “We do it for wins like tonight.”

Utah also was there for a historical moment on Wednesday night against the Portland Trail Blazers at home when the franchise received special permission from the NBA to have a concert violinist play the national anthem of Ukraine in support of the war-torn country. It was the first time the league ever allowed an anthem from another country other than Canada to be played before a game. ESPN televised the tribute.

Earlier that day, the Jazz announced they are contributing 32,200 nights of Airbnb stays for Ukrainian refugees seeking shelter after fleeing their homes because of the Russian invasion. Gail Miller, who owns a minority stake in the Jazz, also teamed with Utah Gov. Spencer Cox and local business owners and philanthropists to raise $2 million and create a public fundraiser to benefit Ukrainian refugees.

The war hits especially close to home for Kings center Alex Len, a native Ukrainian who played 11 minutes in Sacramento’s loss to Denver on Wednesday night. Sacramento coach Alvin Gentry commended Len for being able to focus on the team and continuing to play while his country is at war with Russia.

“With everything that’s going on in his country right now, to me it would be very difficult to really concentrate on anything but what’s going on over there, especially when you see some of the video and the pictures coming out of there,” Gentry told the Sacramento Bee.

“I thought he did a good job (Thursday) in the minutes that we used him, but you have to know that it’s really, really tough for him right now with everything that’s going on over there.”

The Jazz, who have lost three of five games, have beaten the Kings in six consecutive meetings, including three times this season. Sacramento enters this matchup having lost three straight and eight of 10.