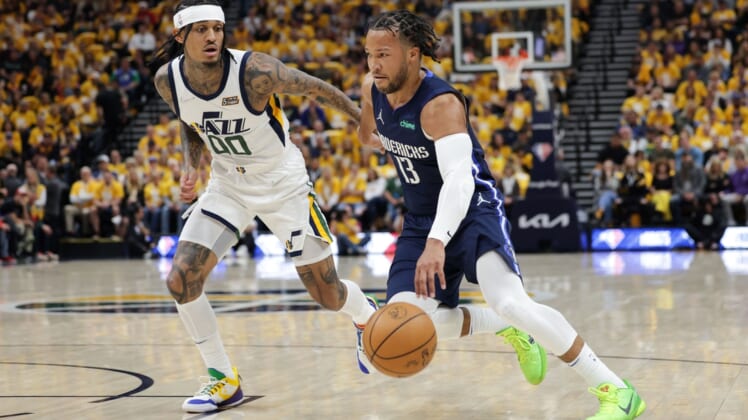 Rudy Gobert made a key rebound and an even bigger dunk with 11 seconds remaining to boost the Utah Jazz to a series-tying 100-99 win over the Dallas Mavericks on Saturday afternoon in Salt Lake City.

Jordan Clarkson led Utah in scoring with 25 points, Donovan Mitchell added 23 points, seven assists and six rebounds, and Gobert finished with 17 points and 15 boards in a game that nearly slipped away.

Luka Doncic, in his first action of the postseason, scored a game-high 30 points with 10 rebounds and gave Dallas a four-point lead with 39 seconds left after hitting a 3-pointer to give him five straight points for the Mavericks.

Mitchell cut the lead to one with a putback layup and a free throw with 31.2 left after being fouled by Doncic.

The Jazz fouled Dwight Powell with 19.8 seconds remaining, and he missed both shots. Gobert then grabbed the rebound and put Utah up 100-99 with an alley-oop dunk off of a pass from Mitchell.

Game 5 will be Monday in Dallas.

Doncic wasted little time in making his presence felt after missing the first three games because of his strained left calf. He assisted Powell on an alley-oop dunk for the first points of the game, and then he hit a floater and a layup as the Mavs opened with an 8-1 lead.

The Jazz used an 8-0 run to tighten things up, and Clarkson gave Utah a 24-23 lead at the end of the first quarter with a late 3-pointer.

Perhaps giving a sign of things to come, Doncic hit a buzzer-beating floater to trim the Jazz’s lead to 54-42 as the half ended.

Dallas reverted to its dominant ways of Games 2 and 3 in the third quarter, opening on an 8-2 spurt and then outscoring the Jazz 39-24 for the quarter thanks to hitting 8 of 10 treys. Dinwiddie’s step-back jumper with 14.5 seconds left in the period gave the Mavericks an 81-78 lead heading into the fourth quarter.

Neither team scored for the first few minutes of the fourth quarter. The drought ended when Royce O’Neale found Gobert for an alley-oop dunk.

Dinwiddie drained a 3-pointer for an 86-81 Mavericks lead, but Clarkson responded with a trey and then three free throws to help Utah regain a one-point edge, 87-86, with 5:35 remaining.

Jalen Brunson had another big scoring game for Dallas with 23 points — after filling in superbly for the absent Doncic in the first three games — and Powell, Dorian Finney-Smith and Reggie Bullock each added 11.